In June of 2022, Broncoskip retired the famous name and goku-inspired wardrobe, giving all donor levels and abilities to a new account named

Moxieskip. Broncoskip has been known to make apperances from time to time, but they are a ghost of their former glory.

All hail to the Goddess Moxie!

Founding Epicaria in April of 2011, Broncoskip joined the server and silently began to construct a decent cobble castle. As the months passed, he became more involved socially, to the point of becoming a moderator on Christmas of 2011. Shortly thereafter, a mysterious force called a Sale transformed this mild-mannered builder into some kind of God. He now roams the server, appearing out of thin air, usually accompanied by lightning. It is said that one had once seen him appear, and only moments later a large tower appeared in the very spot of his sighting. 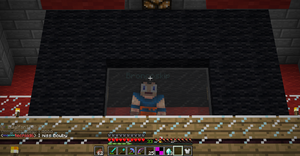 Broncoskip being his usual self and observing.