From MinecraftOnline
(Redirected from Moderators)
Jump to navigation Jump to search 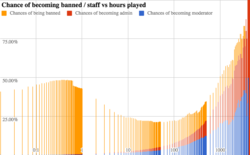 Moderators are a class of player who have been granted additional powers to detect, and prevent grief, spam and cheating.

Moderators have the Moderator role on Discord, allowing them to ban users and delete messages when necessary.

Unlike many other servers, moderators at MinecraftOnline are not given item spawning abilities, invulnerability, or any other command or power that would spoil their ability to play true survival. They are simply ordinary players who are notified of grief alerts, can teleport to investigate them, and have the power to ban rule breakers.

They are supported in their role by admins. The concept is one of role separation; moderators' role is to prevent grief in action, whereas admins are concerned with cleaning up grief after the event, and investigating logs of past grief incidents. However, moderators are also able to repair grief should they so wish, and have access to the Mod Vault for this purpose.

The following 65 pages are in this category, out of 65 total.