DrumCity, one of the best known cities in Freedonia.

Maze based on the maze in the Shining, one of the most recognisable features in Freedonia.

Clubhouse is one of Freedonia's longest-standing megaprojects.

Freedonia is the name of the world hosted on the MinecraftOnline.com server.

What makes it special

This world has multiple distinguishing characteristics which mark it out from the majority of online worlds:

New arrivals would start at the Rules Hall where the rules are listed at. Then they are introduced to the world at the Spawn area in the middle of the map.

The Freedonia Visitor Centre is the first thing you see and is the primary meeting point for the world. 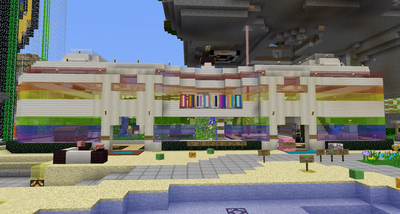 Browsing the map is an excellent way to get to know Freedonia. - many megaprojects are clearly visible due to their scale, and it is possible to get a good understanding of the overall geographical layout and travel possibilities by studying it. Use the "/map" command ingame to get a link. You can then use it in a browser to see what is close to your location.

This wiki is a repository for information about notable buildings, settlements, and organisations in Freedonia.

All players are invited to add to the wiki by creating pages about their own constructions, organizations, and anything else of interest on the server.

For a comprehensive history of major events in Freedonia, see the Timeline page, or for other smaller events, see the Community Timeline page.

These are the ways that players can travel around the world of Freedonia.

The first road in Freedonia was built to connect Spawn to the first settlement away from the centre. Since that time many roads, large and small, have been constructed to help players move safely and swiftly around the server's map. Many of the server's roads are part of the floating FRS rail lines, and other organisations (namely the FRC) and players have road systems.

The difference in scale between the Overworld and the Nether has been exploited by the Nether Highway System to speed travel between locations.

Nexus Portals have been established all across Freedonia and are the standard for all fast-travel needs. To find one at or near your destination have a look at the list of portal sites, or use /nearestnexus [location].

Warps are shown on the map as orange markers, and can be listed in-game with the /listwarps command. Each warp destination is a famous place worth seeing as part of getting to know Freedonia and there is list of them on this wiki.

You can use the /warp <destination's name> command to teleport to your destination.

Although they were once the main means of fast travel, Freedonia's ever-increasing size, and the superiority of the Nexus system have made warps obsolete outside of tourism.

The Freedonia Railway System has service across large areas of the map. Several server attractions and settlements have direct rail service from spawn.

A growing number of destinations are also accessible from the water. Following the marked Boat Routes is a great way to get to know the world and a good starting point for your own exploration. Bring some boats and sail away on your journey!

The Nether that may or may not be real.

Nether Portals are placed in strategically selected settlements around the map to connect cities via The Nether. Access to the Nether Highway System is available using the portal next to the Visitor Centre in the Overworld.

Timelapse of map changes near Spawn.