The Banhammer at the moment of striking, depicted as a statue. 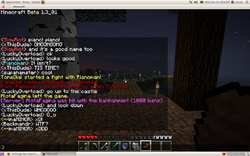 Screenshot of the moment when MinecraftOnline's ban count crossed into four figures. 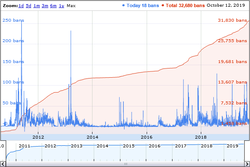 Screenshot of a graph of bans over time showing an initially exponential trend followed a gradual decline in velocity caused by a decrease in the number of griefers left unbanned. Begining in 2017, the ban rate has again increased, with more spikes in daily ban counts suggesting an increase in the number of invasions is the cause of the increase. Image updated October 2019.

A graph showing the probability of being banned, against number of hours played. On the same graph are stacked probabilities of being promoted to moderator or admin for comparison. See an interactive version of this chart.

Graph showing probability of a ban for registered and unregistered players.

MinecraftOnline is a server with zero tolerance for grief, and a highly effective moderator team. As a result, this server has a large (and constantly growing) number of bans.

However, bannable offences are very strictly limited, and moderators and admins are given no opportunity to abuse their power. This server has an important focus on absolute free speech. Although some players may find themselves offended as a result, we feel this is much better than the alternative - a repressive society where everyone fears to express themselves in case they find themselves excluded from the community by an angry moderator.

What can get you banned

But how do you know?

MinecraftOnline logs every occurrence of any player breaking/placing any man-made block, as well as some naturally occurring ones. All moderators online are notified instantly of any such breakage. Even if a moderator does not catch the event at the time, when grief is later discovered or reported, an admin will always locate and ban the culprit after the event based on log evidence.

What can not get you banned

MinecraftOnline is proud of its absolute free speech rule. It is not possible to get banned for:

The server previously featured an automated kick system for individuals detected as using a flymod to fly around, although this is currently disabled due to too many false positives.

However there is no automated ban mechanism in place protecting individual structures, the reasoning behind this is:

"Autobans... we'd prefer not to, it's something that's been discussed before. But there have been cases of people fixing things and getting pulled up as griefers, etc. It does need a layer of human sanity checking to prevent any accidental autobans. The idea that people could be banned automatically kind of undermines the credibility of our entire ban system. Although it's a lot more work, this [existing manual] way we can say that each of our bans have been signed off and checked by a genuine approved human being, who can be held accountable for them afterwards. So nobody can claim they were banned in error by a faulty robot. The other problem with this is the potential reliability of any such system. But I am considering an interrogation holding system that people could be automatically assigned to pending an interview with a moderator... although I'm not sure I'd want to automatically deal with that either." - SlowRiot 16th April 2011

If a player feels they have been banned wrongly - either through a moderator error, or due to a mistake on their part as opposed to malicious action - then that player may appeal their case to an admin on IRC, Discord #ingame channel, or the MCO Telegram group. All appeals must be conducted only via these platforms and by the banned player him/herself.

We will not accept appeals

NOTE: An appeal is not the same thing as a “second chance”! Appeals are only given out if an admin feels like the player deserves one and will no longer produce malicious intent in the server.

The administrative team aim to be reasonable with all of their bans, and invite open dialogue. An appeal will always be heard in full, as long as it is presented in a civilised fashion. However, an appeal is subject to whether the original ban may have been in error, or if it was for genuine grief. Only a minority of appeals are accepted - specifically, those where the admins are convinced that the player in question acted in good faith and without malicious intent, and will not pose a risk to others' work if allowed back on to the server.

If a player was banned via Logcheck, which means that they were never given a chance to speak their case, then if these players choose to appeal, the appeal process will also serve as an interrogation. Unlike those banned via interrogation, though, Logcheck-banned players have a higher chance of successfully winning an appeal, due to the fact that it is their first time stating their case.

In borderline cases, an admin may ask for a banned player to find another player in-game to vouch for them. In this case, the vouching player would be required to accept responsibility for all actions by the player to be unbanned. If the unbanned player were to grief again, both they and the player who vouched for them would be banned. As a result, it is very rare that anyone opts to vouch for a banned player. This is usually a very effective litmus test of an individual's true colours, and their friends' faith in them as a trustworthy individual. Vouches are no longer used/recognized as of 2021.

Begging, threats, talk of "hacked accounts" and denial of log evidence are the four top ways to have a ban appeal rejected. 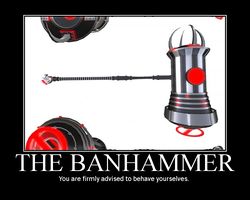 Artist's impression of the Banhammer 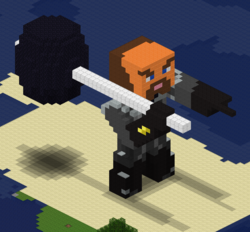 The Banhammer is the colloquial term for the abstract metaphorical instrument with which griefers are banned.

Bans are announced both in game chat and in IRC, with a current ban count.