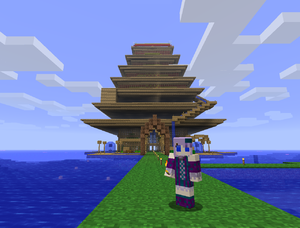 Kiatarie is a 21 year old female from the U.S.A. She has been a member of Freedonia for appx. three years with several longs breaks away. She is a fan of wood, flowers, and large projects when it comes to her building style. After completion and partial abandonment of the Lily Pagoda, Kia has started work on her new house set in a secret location. 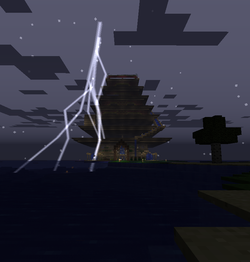 Kiatarie started her days on the server searching for a place to make her home. With a little help from

Eipokruden and others, she started the construction of her Pagoda style house in the middle of a lake.

Loosely based off of a Japanese style pagoda, her house goes from the sea level to the top of the map. With 8 levels altogether, each level is 7 blocks tall and decorated with stacked fences backed by red and yellow wool. it was named the Lily Pagoda.

Kia's new house is set far out on the edges of the map, way away from the urban population (although someone is building right next to me!!?) Pictures may follow in the future as building progresses. Screenshots of the project included below.

Besides her house, which is her main priority at the moment, Kia has also contributed to projects such as Project Anubis, as well as a few others with fellow mod

Zymes. Her last major project beside her house was an Easter Island head at a forgotten location for a forgotten admin.