Stanman_dude fist joined Freedonia in the april of 2011. A good friend of his

GabiTM told him about this great server Minecraft Online. GabiTM gave him a place in his giant Castle and from than on he was known as Stanman :) At first he wasn't really a popular player, but he started being known as StanDudek's clone =)).He helped a few people and started to get a litlle bit known.Now, he is a regular player on Freedonia with over 900 hours.You can find him playing and working at his projects. 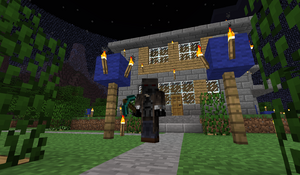