In order to reduce road accidents and congestion in the rapidly growing cities, the Freedonian administration has commissioned a traffic signal system, which has been implemented by

nosefish. You can use these receiver bands together with advanced doors from craftbook to build your own traffic lights: 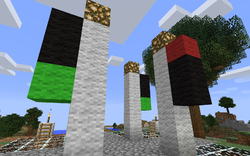 If you know your way around craftbook, scroll down to the Schematics section.

No problem, it's not hard. First, collect materials. For each mast, you will need:

Build the mast where you want it, 5 blocks high. You don't actually need it, but it looks weird without. Next, dig a hole. You know how to do that, right? Make it 6 blocks deep, 5x5, centred on the block in front of the mast.

On the bottom of your pit, place a block in the center. Place an additional block on top of that. Now the chest on top of those 2. Put all the wool from the list inside.

To the left and right of the pillar with the chest, build two more pillars, each 5 blocks high. These will hold the signs for the Craftbook advanced doors later. Fill in the space between them above the chest, so that nobody can steal the wool from it. Now, build two more 5 blocks high pillars, one in front of the left one, and one behind the right one. Those will hold the Craftbook receivers.

That was easy. But now, pay attention. We're doing craftbook. And I must admit that I have lied. You have to sit through some of the technical stuff. It just doesn't work without. But now that you've invested all the time digging, you might as well finish this. Craftbook uses arcane incantations on signs to do its magic. Make sure to have no typos on your signs, or they will not work.

Stand in front of the chest and turn to the left. That pillar in front of you will hold the receivers for the colours. Let's start with the bottom block. It's for green. Place a sign on it. Leave the first line empty. On the second line, write [mc0111] and on the third write TL1-G.on. You have now created a craftbook receiver that reacts to the band "TL1-G.on".

Walk around the block, and place a lever on the back. It will magically switch by itself from time to time! On the block to the left of the lever, place another sign. Again, leave the first line empty, it will be filled in by craftbook. On the second line, write [mcx208], which is the code for for an advanced door. On the third line, write 35:5. "35" is the code for wool; and "5" is lime green. This sign also needs a fourth line, to specify where to place the wool in relation to the block behind the block the sign is attached to. Write 1:1:8 on the fourth line. This means that we want an advanced door that is 1 block wide, 1 block high, 8 blocks above the block behind the one the sign is attached to.

Look at your mast and wait a bit. The green wool is appearing and disappearing already! But we want more. We want yellow and red, too.
Let's do yellow first. Go back to the chest. We place this two blocks above the RECEIVER for green, on the level of the chest. If we placed the sign on the block above the first one, it would not work reliably. Write [mc0111] on the second line just like before, but for the band, write TL1-Y.on. Y for Yellow. Simple.

Next, add a lever and the advanced door sign next to it. It's [mcx208] again, but for yellow wool write 35:4 on the second line. Also, we want the block to appear 1 block above the green one, but the sign is 2 blocks higher than the one for green. So on the third line, write 1:1:7.

Do the same thing again for red, 2 blocks above yellow, with the modifications for colour and position:

Look at the mast again: Working traffic lights! But those empty spots where the colours are inactive don't look good. Let's fill them with black. We have just the right setup for those signs to the right of the chest. The receivers go on the blocks behind it, the advanced doors on the blocks to the right of the chest. The receivers are just the same as for the colours, but the bands end in .off instead of .on. The doors have to be in the same positions as those for the colours they are replacing, so the fourth line is the same, but with black wool, for which the code is 35:15. Easy! Don't forget the levers!

From top to bottom:

That's it! You have just built your first traffic signal. Seal off the top of the pit so that people won't fall into it. On the opposite side of the crossing, build the same thing again. For the crossing street, build 2 more, but remember to use the TL2- receiver bands from the table at the beginning of this page, or all the signals will be the same, causing horrible accidents to happen on the crossing. 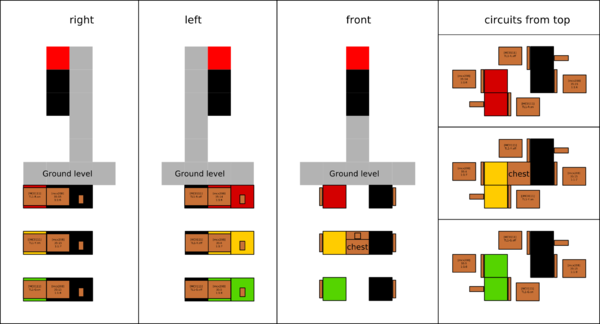 Click to enlarge. The signs can only be read at 100% view.
Retrieved from ‘https://minecraftonline.com/w/index.php?title=Freedonian_Traffic_Control&oldid=9434’
Categories: