Spleef is a popular game at MinecraftOnline. Multiple arenas have been built around Freedonia for this purpose. 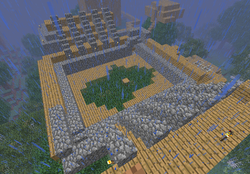 An arena with part-leaf floor

Gameplay consists of an arbitrary number of players gathering in a spleef arena. When the game is declared as having started, players must use their hands (no tools) to break the blocks of the arena floor, with the goal of causing the other players to fall through the gaps. The last player standing in the arena is declared the winner.

Using tools, or attacking other players usually leads to disqualification.

Spleef arenas are usually either square or round, featuring a flat floor. There is often a raised wall around the perimiter to prevent players from exiting mid-game. The arena floor usually has a drop into water below in order to make the game survivable. Often the drop is a long one for added dramatic effect, and as a result many spleef arenas are located high up.

Floor materials are usually rapidly breakable but inexpensive materials - a traditional example for manual arenas being dirt. More sophisticated arenas may feature other materials such as lightstone, glass or leaves - the latter two are often chosen for automated arenas because they do not drop any item when broken, making them suitable for automatic regeneration without the possibility of material harvesting (which would violate survival principles).

With a traditional manual spleef arena, it is necessary to rebuild the floor by hand in between each game, which is a tedious process and disrupts the flow of gameplay.

As a result, it is often preferred to automate the floor regeneration. This can be done in quite a sophisticated way using Craftbook [area] signs (admin-placed) connected to an inverted toggle button; after a spleef round, pressing the button briefly deacrivates the area, and when it reactivates it will reappear in its unbroken state. A lower-tech version of this can be achieved without admin intervention by using Craftbook [door] signs and associated refill chests. Simply clicking the sign itself can suffice, although using a button is more aesthetically pleasing.

The battle takes place on multiple stages, and there are several arena floors one above the other. This opens up interesting tactical possibilities, where descending by one level may be advantageous in order to knock the floor out from underneath other opponents. The possibility of falling through multiple levels at once makes for longer, and much less predictable games.

A leaf spleef arena floor in use

A variation that requires admin intervention, or an admin-constructed arena. The arena floor is created at the moment of game start, out of leaf blocks. Without nearby log blocks to support them, these slowly decay at random. This adds an extra hazard to gameplay, as players must watch for new gaps constantly appearing in the floor as they battle. Leaves being quick to break adds to the fast-paced nature of this game variation, and this game may be accelerated by playing with swords for extra rapid leaf removal. This can also be played effectively with a floor more than one block thick, unlike other variants of spleef, due to the constant leaf decay running through all levels equally.

A rather violent and fast-paced alternative to the ordinary safe-drop spleef games. The drop is configured to be fatal - either simply a high drop, or a drop terminating in lava, a cactus bed, or some other sticky ending. This creates an added incentive for players to avoid falling. Such arenas may feature additional hazards such as arrow shooters in the arena walls, toggling Craftbook floodgates overhead, or initially incomplete or irregular flooring patterns, making for a very tense and adrenalin-fuelled game.

If ordinary block breaking is too slow, speed it up by using a quickly-broken block type, and handing out the appropriate gold tool to all players.

The opposite of speed spleef - blocks are chosen to be hard to break, such as cobble, or even obsidian for a hardcore game. Players are not allowed tools, and must plan their arena destruction tactically in order to cut off and box in other players. Games of tactical spleef can last tens of minutes rather than the usual tens of seconds. It's not unusual for such a game to end in stalemate as players isolate themselves on their own islands, or a draw as multiple players end up trying to balance on one remaining block.

The gloves are off - in this variation, hitting other players is just as legitimate a tactic as knocking out the ground from under them. Can lead to some interesting tactical variations - often knocking players off is still the quicker way to win than trying to beat them to death, but it's also possible to knock them into an existing hole which they may not have otherwise fallen into.

A variant of Spleef developed on Freedonia. The excitement of regular spleef is enhanced by adding random water flows which fall onto the arena floor, pushing the players around.