From MinecraftOnline
(Redirected from PVP)
Jump to navigation Jump to search

PvP is one of MinecraftOnline's Principles. 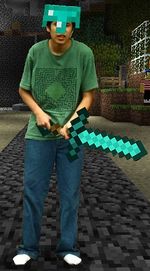 Example of a spawn killer in action

PvP is an acronym for Player vs. Player and refers to combat between players. Any attack that damages another player is regarded as PvP. In addition, other forms of attack such as looting the chests of another player, slaying their farm animals, filling their house with chickens and boats, etc., are also regarded as a form of PvP. PvP is permitted at MinecraftOnline, as long as it is not taken to excess and does not degenerate into Bullying. Though the culture of the server tends to mostly lean towards cooperation and peace, the possibility of violence is always lurking when not obvious, and theft is rampant. PvP is enabled on MCO as it is a natural part of survival multiplayer gameplay, and removing it would gut a fascinating dynamic from the game.

Across the lands of Freedonia, PvP activity can provide you with wealth you could scarcely imagine just as easily as it can leave you humiliated and penniless. This article discusses how to stay on the winning side of PvP interactions, for both yourself and your structures.

When you are out and about, you can easily become a victim of PvP. Some players will just slay others for fun or the severed head item, and return the gear; but usually a PvP encounter entails one party being mercilessly slain and having all their belongings stolen. There are killers on the server who deliberately seek out and kill whoever they can find, usually by luring an unsuspecting player into a position where they can be attacked without possibility of intervention, or by sneaking up from behind for a cowardly backstabbing. Please protect yourself from attack so that you can enjoy your time on the server. Additional info:

Do not make yourself an easy target, or you will be punished for it! Should you be slain, there's a low chance your assailant will give you your gear back. They may even pretend to give it back, but kill you again instead, or burn it in front of you.

If you don't see your attacker coming, they'll have the advantage over you every time. Knowing where a potential killer could be is a great way to avoid them. If a spawn killer is online and active, then maybe take an alternate route to Nexus Central. If you think someone might be hunting you, keep an eye on the closest fast travel point. Some areas are much more dangerous than others, mainly the area just outside the spawn portal and the NHS hub in Nether, the area just outside of spawn, the spawn farms, and the Nexus central hub. Headhunters and other killers frequently camp these areas to kill unsuspecting travellers. Keeping your head on a swivel, your eyes and ears open, and using /nearestplayer are essential to check if someone is approaching.

Additionally, take caution when AFKing for long periods of time. Using a public farm can be an easy way to lose all your possessions, and while some farms have features to prevent AFK killing, most don't.

Whenever you are outside of a protected area like spawn, you should always wear a set of armour. This armour can save you precious time to react in the event that you are attacked. You should also always keep a weapon in your one of your hotkey slots, if you have to search for your weapon when you are under attack, you will almost certainly be killed before you can arm yourself.

It's important to note that many other players who approach you do not wish to attack you at all, but this is not often easy to judge. Take note of their gear, and any weapons you might have seen them holding. Gear is almost always the deciding factor in PvP, so if an unarmoured player approaches your armoured form, it's very unlikely they want to fight. But if they betray your trust, that's where your armour and reaction times will come into play.

If dying itself means nothing to you, and you don't care who has your head, you can simply follow the opposite of what's been suggested so far. Carry nothing of value on you while exploring, and dying has little consequence.

There's a number of tricks you can learn to stay safe from PvP.

Besides knowing the information listed above, and having a good understanding of Minecraft combat, there are a few tips and tricks you can use to really step up your PvP game and sow fear among the Freedonian populace: 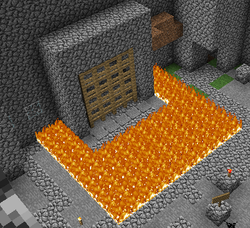 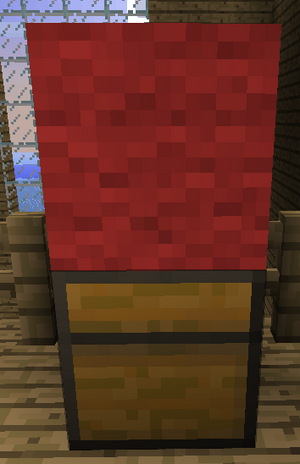 Wool placed over a chest

On Minecraftonline.com, stealing, like all other forms of PvP, is permitted, as long as the act does not degrade into bullying, and the one stealing does not grief in order to do so. The most common form of stealing is the looting of unlocked chests. Chests are used by everyone to store large quantities of items, thus it is pretty much a cake walk whenever another player comes upon an unprotected one. Alternate forms of stealing could be removing saddles from horses, riding away on the horse itself, emptying furnaces and other storage blocks, mooching off of private grinders and farms, or perhaps even taking screenshots from a restricted and private area.

Stealing is only bannable if the thief employs griefing in order to access the loot. Therefore, the best and most universal way to protect your chests is to place a block over them as to prevent access. Any solid block that's not naturally-generated will work, but the best and most popular material to protect chests is wool. Most moderators and admins will respond to all grief checks concerning wool, thus you can usually count on the griefer being intercepted before they are able to steal your items. You should also hide your chests to prevent people from even knowing where your chests are in the first place. The more hidden a chest room is, the less likely an inexperienced player will just saunter into it and start breaking stuff. An easy option would be to hide your chest under a block that blends in with whatever area it is currently it (for example, if you have cobble floors, hide your chest under a block of cobble). Make sure not to forget where you have hidden your chests!

However, it is important to note that this does not prevent your chest from being robbed. An inexperienced player may not realise that breaking this block counts as griefing, or that they will be banned, for instance. It is important not to rely on this method. If you are robbed, and even if the player who breaks your block is banned, it won't necessarily bring back your lost chest contents. Backups to roll your chest back to might simply not exist for the correct time, though this is unlikely.

A more secure option to protect your chests is to use the /LWC plugin, this is a server side chest protection plugin. It allows you to make a chest private, or set a password for your chest or furnace. LWC-protected chests cannot be broken by hand. To view the options for lwc, simply type /lwc in game chat, and a menu will pop up showing you what commands are available. Most players can only lock two containers this way, so these should be 'spent' on two double chests reserved for your most valuable items. Obviously, keeping your most valuable possessions in an enderchest will also utterly deny them to thieves. Shulker boxes can be used to vastly expand the amount of loot you can keep safe this way.

If you have items on display in item frames, note that skeleton arrows and creeper blasts can be manipulated by a griefer to knock them down without manually punching them. This is still considered grief, but can be mitigated by placing your frame behind glass and using a hidden chest collector to pick up and store dropped loot before the griefer can pick it up.

You should also make an attempt to prevent access to your home, the most simple way would be to /sethome inside your house, and then /home whenever you want to get back into your house. If you use this method, you will have the option to seal up all possible entrances into your home, thus providing a higher level of security. It is worth bearing in mind that donors can also use additional commands such as /thru to pass through solid walls without damaging them, so this may not be adequate defense against a dedicated thief. You can also use a variety of redstone powered traps, and secret doors, which utilise the minecraft add-on called craftbook. Using these methods you should be able to keep your home relatively safe, and if they do manage to get in, you can make their time inside very hazardous.

If you catch a thief in the act, or find an interloper in your home, you have a significant advantage over them; you can edit blocks here while they can't.

Many players leave their chests unlocked, either because they forgot to re-lock them, or they didn't expect anyone to visit. You can enlighten them as to the error of their ways. If you truly want to harvest as many open chests as possible, look for towns or bases that are under active development, or visit remote areas you think previous thieves might have not bothered to visit. If someone gives away their location in chat, keep in mind other players might immediately take advantage of that as well. You can also just stumble into an old build near spawn and happen upon an unlocked chest that miraculously hasn't been looted, there is a lot of luck involved.

Take careful note, there are many techniques you could use to enter someone's base that would be considered cheating or griefing. Here are a few:

If you've thought up a way to enter a base that isn't blatant hacking, consider: does it exploit a bug in the game? Is it something a reasonable person would consider a glitch or an unintended feature? If you have any doubt, ask a member of staff first. Here are some LEGAL techniques you can use: