Adalex3. It is located in CosmicCity in between Original Cosmic and the Western District. It stands on a hill overlooking Original Cosmic, Cosmic Beach, Spruce Village, Western District, and Port Cosmic. The Fortici Tower consists of a 48-block-tall base with 8 floors and a lobby. There are also two towers in front of the main base that are about three and a half stories tall each. Because of this, the Fortici Tower is the highest standing building in CosmicCity

Adalex3 with some help from

Slime_tiger, another resident of CosmicCity. That day, the tower grew to be 6 stories tall. The massive amounts of wood and cobblestone were acquired from The Iron Reef. The next day, August 1, 2017, the next two stories were built, along with the walls, the towers, and the elevator.

The lobby is the largest floor of the tower. So far, it only contains the elevator signs to the other floors.

The top two floors are reserved for

Adalex3. He has a marvelous view of the ever-expanding Cosmic City, and a drop chute that he can use to quickly get down to ground level.

Slime_tiger is a fan of the chute and uses it often.

The third floor is the Cosmic City Court House built on August 3, 2017. It is used for discussions about the accused griefers, stealers, and bullies in Cosmic City. If the player accused is found guilty, they will be taken to the Town Hall to be banned from Cosmic City. 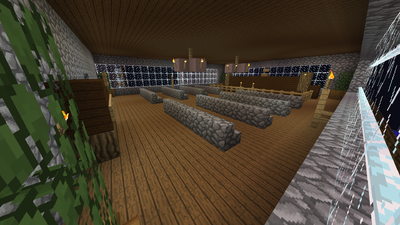