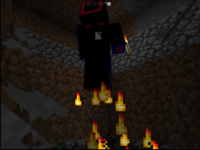 spelling is for the waek -

Ampqre is a former moderator on MinecraftOnline, demoted due to inactivity in December 2011.

Ampqre aka "The Amp" aka "The amperean emperor" is the ruler of the Amperean empire, and one of the older moderators on the server.

Ampqre is known to be helpful and to set people on fire. He does not and cannot fly - if you think you see this, it is a bug in your client.
He cannot fly.
It should be noted that if you need help, ask, and you may receive. 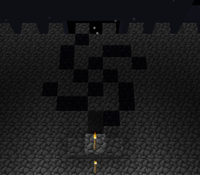 Interviewer: Hello Ampqre.
Ampqre: Hello.
Interviewer: So Ampqre, we hear you have not been on the server as much as you used to be - can you tell us the reasons for the decline?
Ampqre: Well its 3 things mainly . . . The first is I have a lot of work to do and that has been taking away from my game time. Also the server is very full these days, and I like a less full chat box so I can talk to people and get to know them. Now it just feels like shouting in to a crowd, you know what I mean?
Interviewer: Yes I do, but you said there were 3 things?
Ampqre: Oh yes and the game mode in the old days was very sand boxy but the server has grown into a full survival server, as the admin wants - but I’m more of a builder then a digger.
Interviewer: Well tell us about the dam: you built that with only naturally obtained resources.
Ampqre: Yes I do sometimes dig up the materials I need, but it feels like such a waste of time when I have so much work to do in real life.
Interviewer: Ok, so could you tell us a bit about your work at power plant (Aka battlefield)?
Ampqre: Oh yes sad story there you see . . . to be continued

And a hell of a lot of small things.