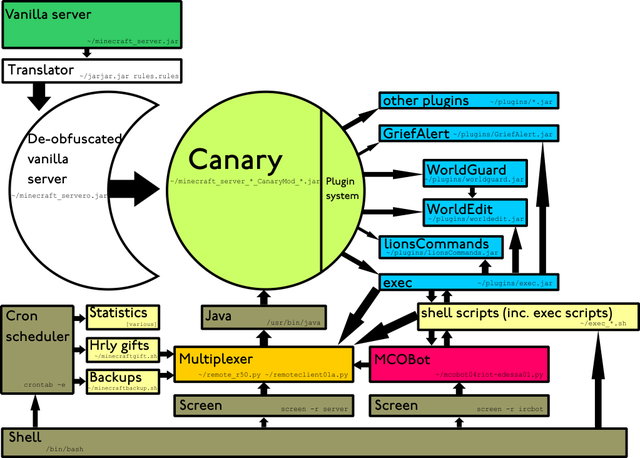 Server organisation diagram, showing Canary as a key portion of the overall infrastructure

CanaryMod, or Canary, is a Minecraft server mod currently maintained by the CanaryMod Team.

It adds a variety of enhancements, bugfixes and new commands to the stock server. Additionally, it provides the API and framework for running plugins on MinecraftOnline.

The original CanaryMod, known now as Canary Classic, was a fork of hMod, the Alpha server mod. The project existed to allow hMod plugins to continue to run, as an alternative to the (at the time) new Bukkit mod.

In mid-2012, it was announced that Canary Classic, which at the time was just CanaryMod, would be depreciated in favor of a new, rewritten server mod. This required servers running it (including our own) to rewrite plugins for this new API and mod.

In October of 2014, MinecraftOnline ported to the new CanaryMod, running Minecraft version 1.7.10. Even after the official release of this mod, many features are being improved or fixed by members of the CanaryMod Team with contributions by some MinecraftOnline staff members.