"Notch is too indie to care about his customers :x " ~

"Bitches can't stand when his cock has buffer overflow issues." ~

"...before he turned into a HUGE DOUCHE" -anon
"is notch a huge dutch? thought he was swedish?" -

A controversial figure whose dubious coding style and apparent inability to test his code in the least before releasing it, let alone fix bugs afterwards, has earned his name the equivalent status of a swearword on this server.

To make Notch's game playable, and rectify some of his many mistakes, most online servers run various mods. This server is no exception, running Sponge. 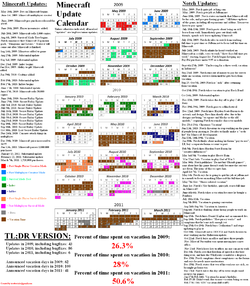 Notch being lazy (click this picture for a bigger version).

The man is infamous for his repeated holidays. He complains about his lack of money, complains about people swearing (ironically), and instead of actually coding now, he offloaded all his work to jeb_, who is known as "That guy who isn't an idiot".

After deciding he couldn't handle the pressure from a community of a game like Minecraft, he decided to just sell the entire company away to Microsoft, going against virtually everything he has ever said. In doing so, he and his team have lied and fooled many of the community members, including the staff and players of MinecraftOnline with false promises which, in retrospect, were probably too indie good to be true in the first place