Glen Team is an organization created by

mrsprinkly. The main objectives of the organization are to build beautiful and attractive constructions throughout Freedonia, especially in Glenfiddich, and to be a friendly community and help each other.

Tired of running all over the vault to sort your stuff? Can't find the chest with the blocks you're looking for? Always worrying whether you've locked all the chest you've accessed properly? Fret no more!

nosefish has built an automated storage system for Glen Team. Over 1500 double chests of storage space at your disposal! Store the contents of your messy inventory by simply putting them all in a single chest! Get a shiny new set of diamond tools and armour without breaking countless blocks of wool! Here is how to do it:

Throw in everything you want to store into the chest framed with dark green wool or the hopper next to it. Everything works automatically.

Simply throw everything in here

Junk will be end up in the pit below the ordering corridor and eventually despawn. If you've thrown in your favourite wood sword by accident, you can retrieve it there. Items that can't be stored, like fireworks, written books, player heads, etc, will go into the overflow chest.

To be able to place an order, you first have to enter the password (check your /mail!) in the security terminal. 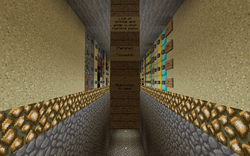 What's with that ugly cobble pit?

Look at the sign saying [Terminal] and type /terminal thepasswordfromyourmail in the chat window. This will make the floor appear and the buttons become reachable. To reset, right-click the [Terminal]-sign. 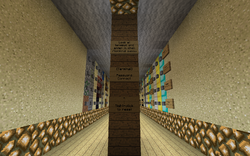 On the left hand side of the corridor you will find the placeable blocks. On the right hand side are all the other items, like tools, armour, dyes, food, etc.

Walk along the corridor and place your order by pressing the buttons corresponding to the items you would like to take out. With each press you will order the amount that fits in one inventory slot (usually a stack, 1 for weapons, 16 for eggs, etc). 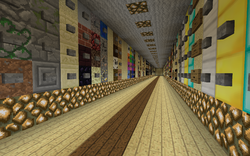 The items you have ordered will be transferred into the chest framed with red wool. This takes about 15 seconds unless there is lag. Unlock the chest, take out what you need and lock it again. If you did not take everything, press the button above it to leave the chest clean for those that come after you. Don't forget to reset the security terminal with a right-click before you leave!

The chest framed with black wool stores all items that could not be stored. This might be because there is no more storage space for this item type (unlikely), because it is an item that is problematic to store for some reason (e.g. written books), or because it has been added in a recent Minecraft update and the storage system hasn't been updated yet. In rare cases (e.g. server restart) it can also happen that the chest collectors miss some items and they end up here. 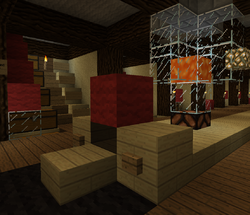 You can see at a glance if anything is in here by looking at the redstone lamp under the lava thingy. If it's lit, there are items in the overflow chest. In this case, unlock it by breaking the red wool and take the items out. If they're all worthless junk, press the two buttons to the sides of the chest in quick succession to burn them all in the lava thingy. The security terminal has to be active, or this won't work.

When you're done, place the wool back on the spot you took it from to lock the chest. Do not put it directly on the chest, or the indicator light will not light up any more when there are items in the chest (minecraft limitation).

Remember to reset the security terminal with a right-click before you leave!

Really, this is important.