"I'd fix the sign on the grief cactus, but the peanut gallery will probably mob me" -

The Spawn Cactus and Spawn Reed are a pair of tall tower plants, encased in glass for their entire height. The satisfaction of smashing through the glass and bringing the delicate structures crashing down is too great a temptation for many griefers to resist; as such they make a very effective grief trap.

The spawn cactus was created by

bastetfurry with the goal of identifying griefers before they exit the spawn area to do widespread damage, by means of the classic honey-trap method. It consists of a single pillar of continuous cactus, encased in a 63 m high shell of glass, with an opening at the top that allows people to jump into the structure. If you do this, you should, like with everywhere else on the map, /warp out rather than break out. The cactus has proved remarkably effective, to the point where many griefers never exit the spawn area but are instead banned after their guilt has been verified.

Historically, signs warning of the dire consequences of griefing the builds were placed on them. However, such signs are rarely, if ever, seen on the grief traps these days.

The cactus is accompanied by its companion grief-trap, the Spawn Reed. Identical to the cactus in shape and size, this monument contains a single pillar of reed or sugar cane, and replaces the cactus' fiery moat with water. 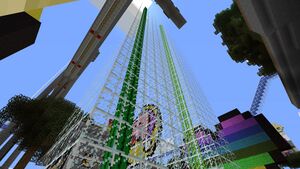 The Endangered cactus and its friend.

A similar sculpture is located at the Watershire warp with a personal threat of being hunted. 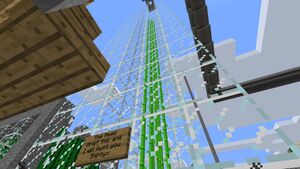 The Grief Reed at WaterShire, with its personal threat of being hunted.
Retrieved from ‘https://minecraftonline.com/w/index.php?title=Spawn_Cactus_and_Reed&oldid=62597’
Categories: