Shintyx> did you just say it's painful to walk around spawn?

Spawn is the area where all new players appear at the very beginning. Spawn also means 'to appear' in a video game, where either player, bots or items seem to appear from nothing.

The player can warp here directly by using the /spawn command. This is also the default area a player will find themselves after getting killed and clicking respawn - this "revive point" can be changed by sleeping in a bed, but it is not possible to teleport to the bed again without dying and respawning. 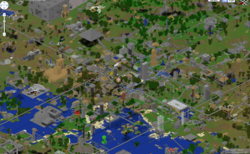 Map screenshot of the spawn area, demonstrating the busy nature of the place

In-game map of the spawn area, generated at the advent of the Beta 1.6 update.

The original spawn in the first iteration of Freedonia.

Sunset over spawn around Easter 2013, showing the winner of the Snowman Competition at the back on the left.

Classic view of Spawn in its traditional layout

A view of the spawn, with Flippeh obscuring a sunrise.

The Old Visitor Centre, as seen from an angle.

The spawn has never been moved in the history of Freedonia. Therefore, the sandy beach where every new player connects is the same landing point that

runechan first set foot on, when she generated the world.

This world was chosen for the view at spawn. A dramatic overhang was present in front of the player, with rolling hills and valleys ahead, to the right and behind, and an open body of water with an island to the left.

"I'd fix the sign on the grief cactus, but the peanut gallery will probably mob me" -

The continuous spawning of individual players at the same point since the beginning of time has been accompanied with certain challenges. A much higher level of erosion than normal has always been seen in the area. At one stage not a day went by without the Spawn cactus being griefed. However, being a grief trap, this has always been its purpose. However, the introduction of the tour system, with players exiting at the Central Nexus of Project Anubis has to a large degree displaced this effect.

The advancing degeneration of the quality of the surroundings at Spawn has been another problem. Historically there have been several strip-mined areas around spawn, and due to the nature of the game, the number of "ugly" dirt castles and "first-night-shelters" is constantly increasing. The strict grief-control policies of the server have in the past prevented even such buildings from being removed by other players, leaving it up to admins to clean up abandoned buildings.

The Spawn Wall project was begun in May 2012 in order to address the issue of quality of building around Spawn. It is an exclusion zone within which any buildings not judged to be of high standard or historical value are frequently improved or removed by admins. Since July 2021 territory inside the wall can't be modified by non-registered players.

Several buildings in Freedonia are protected by an ancient spell.

Attempting to walk, jump, /jumpto, /thru, /descend, /ascend, /tpto to coordinates inside or otherwise enter into these buildings results in a physical rejection by an invisible barrier and a message that an ancient spell prevents access (possible reference to Castlevania).

It is said that the ancient spells protect the houses of Freedonia's Administration, but further proof is needed.