Average Player on any day: "Hey guys, I just built an awesome tower!"

Palindrome7's mental reply: "Mine is better."

Palindrome7 is an admin and builder extraordinaire. There is a very good chance that if you have done something, she has already or soon will do something far superior. Widely regarded as one of the most able builders/designers in Freedonia, she is a master of hexahedron-based architecture.

Shortly after arriving in Freedonia, Palindrome7 decided she would not settle for the common terrestrial structures found throughout the land and Floatania would be the eventual result. She set forth from Quarryton to find virgin lands over which she could construct a new wonder. Starting with a simple (by her standards) circular, domed cobblestone building (the only building she has made of the material, kept that way for historical and sentimental reasons) with which to shelter herself at nights, she learned the ways of [Lift] signs and never looked back. Beginning with a cluster of utility islands, she expanded to a massive earthen ring which would serve as the connecting point for the city. One might ask how she managed to grow such a beautiful quantity of grass in such an unlikely location without a grass block to place. The answer: pistons (before silk touch). Floatania is the first known example in Freedonia wherein pistons were used to move grass blocks to otherwise barren places. As evidenced by the lush greenery of the ring and domed park, the technique was a success.

Aside from being one of the most spectacular locations on the server, Floatania boasts a number of attractions and utilities:

The Eye of Freedonia

Located in the far western reaches of Freedonia, The Eye is a marvel of architectural prowess and serves as an example of a number of rare or even unique features. The construction process was remarkably long, totaling almost five months, and was a solo project (as with all of Palindrome7's personal builds). The Eye is seated in a massive hemispherical pit measuring 125 blocks across. Dug entirely by hand without the aid of any mobility powers, this excavation is a wonder in its own right.

The tower itself stretches from bedrock to the build limit (prior to update 1.2). The specific features of the tower are best seen, not read in detail, but some key aspects are as follows:

Palindrome7 was the primary designer of the Mycelia Rail Line, suggesting both the round tube shape as well as the flanges found at regular intervals. 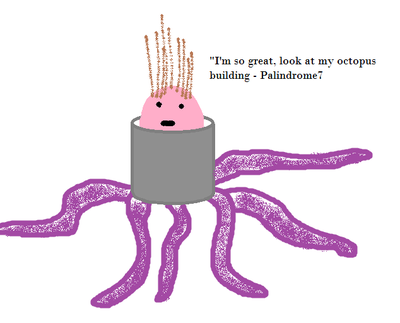 Palindrome is currently in the process of creating a new build. When asked what it was, she replied "just another build".

werdnaz (Better known as weirdnaz the megadouche) commented out that it looked a lot like an octopus, and provided an exquisite piece of art to validate his point.