Stone burrow is a small village located along the north railway. The village is not visited much, as the stop is broken and the tax money used to fix the railway is being spent on rebuilding the old stations. The town consists currently of a station with a few shops and a rather unused hotel. The stone burrow wheat company is operated by

odin679 on a nearby bluff selling bread for one coal a loaf.

After years of having no proper rail link, a station was finally connected to the Freedonia Railway System by 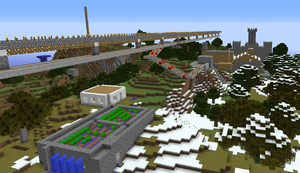 Wide view of Stone Burrow from an connection Walkway. in the foreground, we can see the Stone Burrow Wheat Compagny fields, and behind the new FRS station 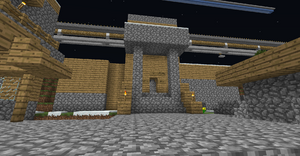 Stone Burrow Town Hall. The old station was built inside this building
Retrieved from ‘https://minecraftonline.com/w/index.php?title=Stone_burrow&oldid=68748’
Categories: