nosefish loves to explore by boat. After countless hours of sailing he realized that he could make a large part of the map accessible from his Temple Of Supreme Fishiness by digging just a few short canals to connect major bodies of water. He has since marked several interesting routes with buoys and plans to expand the network over time.

After finishing the Great Circle and Lothendal routes, as well as some branches,

nosefish undertook an epic voyage to navigate their whole extent. Read his account of the journey here.

In order to be able to successfully navigate these routes, your render distance should be set to at least Normal.

Dear builders, when building roads or rails across water, make sure to leave spaces at least 3 blocks wide and 2 blocks high to allow boats to pass.

Blocking the boat routes or meddling with the buoys is grief. Should you find any kind of damage on your travels, please tell a mod or admin about it. 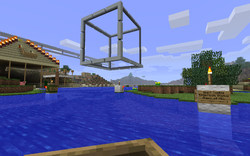 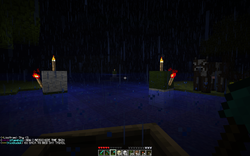 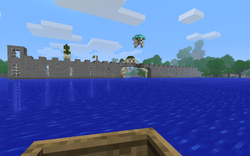 Why would you warp to the sights of central Freedonia when you can go all the way round by boat? See all these exciting places from a new point of view:

All branches of the Great Circle are marked with white buoys. 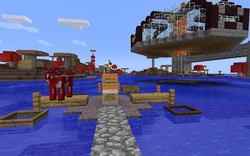 Explore the wild lands of Freedonia's east and relish the sights of ancient Port Dhal, or attend a game of Pigchinko at Lava Town. If you are feeling adventurous, go all the way to Mycelia in the eastern ocean. 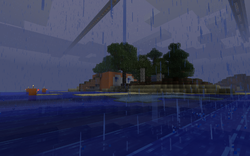 Go from Spawn to the Central Nexus by boat! You could, of course, just go through the South-East Nexus, but where's the fun in that? In a boat, you will pass lots of interesting places along the way:

"hey the water at your beach house is turning to ice" -

bubba_basti
Because of the then new snow biomes and the destruction of its original destination, the Acsidol Route had been drastically shortened. With Rutopia having become a warp,

14mRh4X0r planned a route through the eternal ice.

Visit the picturesque town of Autumnwood and check on the progress of the construction of UnderWater while you're at it.

Connects the ancient city of HillValley with Bastiansdorf in the far west.

Journey to the beautiful town of New Venice from the Central Nexus, passing Diamondmall and Artville, with a very quick branch to Greenhaven Village.

The ultimate adventure: cross the vast Freedonian ocean in your tiny boat, explore a mysterious temple on a jungle island, discover underwater caves and ravines, admire large-scale artwork at StatuePark, attend a lecture at Avalon University, navigate treacherous swamps and winding rivers, and when you're done, have a cool drink at the NewHaven Ocean Bar.

Buoys being stored at Sporangium

Also known as the Anna Route

Connecting from Novum Culta and the FlyingJellyfish Route to the south expansion of the map, all the way to Bastiansdorf in the west. Made by

Anna_28 with help from

The Mushiana Route will also be extended to go around the map and reconnect with the FlyingJellyfish Route to create a giant circle. For more information see the Mushiana route plan.

A boat route that is mostly canals through the southwest area of the map. Built after the 2020 map expansion and have Newport as its main destination. Made by

If you need to change a section of this route for whatever reason, you can do it, as long as you provide a new connection with a minimum width of six blocks. You also have to add buoys to the new part to prevent confusion.

The Bee branches are made by

A boat route through the central southwest area of the map. Made by

Zigzagging through the southwestern corner of old Beta terrain, this boat route goes from New Venice to Winterthorn, thus serving as a connection between the New Venice and Mushiana routes. The buoys aren't made of wool, but rather two snow blocks topped with a jack o'lantern, hence the name Snow Golem Route. Made by

Daltalf with the help of

Travel from Dragon River Peak City to the Emerald Mall, enjoying the high quality destinations along the way! This route will hopefully be a helpful addition to the infrastructure in the most Southern region and form a useful connection to allow others to go further in the future. Built by

Anna_28 in planning. Click here to get a map view of the junction at Dragon River Peak City.

Explore the sparsely populated northwestern part of the 1.12.2 expansion. Maybe stop and attend a race at the Mendington Ice Circuit:

Travel in the North Western 1.12.2 expansion area with this line. Starting at the same point with the Swedish Route (near the Snakyman Holding A Giant Salami Statue), Built by

Maidy_Yuki the June 30th 2022, an new extension opened the August 4th 2022 who connect the Swedish Route to the Mushiana Route

A boat route in the Northern area of the map. Buoys placed by

As far south as you can travel,
tracking along the near edge of the inhabitable world,
traversing deserts and the most inhospitable forests.
Buoys placed by

YugRekooh Still growing daily - as fast as I can paddle.

22.5km long at the moment. That's about 17% of the total distance around Freedonia

Explore the ancient south-east corner of the original map with

Note: due to uneven water, it is necessary to disembark and embark on the boat again on the designated platform when going from Skyline to MonopleVille.

These places are already accessible from the network, but the way is unmarked:

These places could be made accessible with reasonable effort:

How to mark a Boat Route

When marking a boat route, you will need:

Any boat routes recorded using Template:BoatRouteData will be automatically added to this category: