44trent3 made a start on a really huge building in a southern winter biome. It is large enough to be seen from orbit...or at least in a zoomed out map view.

Bytebasher found it in January 2019, and

44trent3 later revised the page to accurately reflect that it is indeed his build. 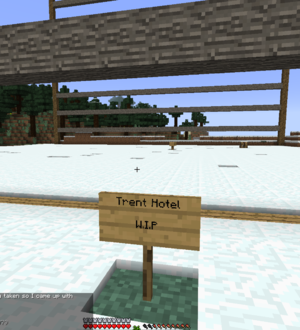 The structure is 34 levels high and each level is 3 spaces apart, for a total hight of 3 x 34 = 102 blocks. There is no sign of scaffolding and the ground was not covered in a water pool so it was presumably constructed by towering up and the creep-placing the horizontal blocks. The verticals are oak logs and the horizontals are acacia logs.