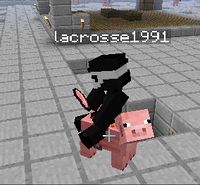 lacrosse hunts griefers on his pig 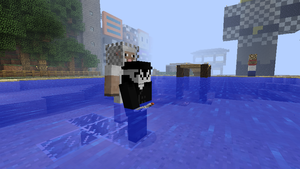 Lacrosse1991 is a distinguished member of the MineCraft Online moderation team. He was modded on 16 March 2011 (see timeline) and promoted to admin on 30 April 2011.

Lacrosse is Freedonia's 'good cop', powered by an unearthly energy (possibly related to the light levels of his home planet compared to those of our sun) which enables him to act in a friendly and helpful manner long after normal mortals would have succumbed to burnout and the resulting cynicism.

Displaying patience worthy of an entire religion's worth of sanctified Christians, he is often overheard questioning griefers in a polite yet firm manner on the subject of their activities. Despite his deserved title of "nicest guy on the server", Lacrosse wields the banhammer with a moral strength which reflects his loyalty to Freedonia and its players.

Lacrosse has recently been observed in the guise of Rorschach, which no doubt contributes significantly to his interrogative powers.