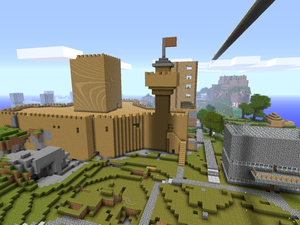 Wooden Castle is a prominent wooden castle, and one of the earliest large buildings still standing in Freedonia, first constructed close to Spawn.

The original creator is not known. It started as a single wooden tower in a forest. The forest was consumed for building materials, and the tower was taken over by another player, also unknown, who expanded it to be a walled castle with a staircase.

At least one restoration effort spearheaded by

ViperBoy316 attempted to restore the Wooden Castle to it's former glory, but appears to have been abandoned.

As the years passed, and the build standards of the Spawn area were raised, the Castle became an eyesore. A report from this time:
"Recently, the building has been wrecked, it does not even resemble the original picture anymore. Players come and go, taking their blocks of wood and their torches when needed, the once so great castle is currently but a ghost house."

A lot of damage was done as players removed material for new builds. That, and the low quality of the original structure made it easy to decide that it should be moved to a museum location further from Spawn, and to have a new wooden castle on its site.

It was relocated to this location on December 2014 and its site, just a short walk North-West of Spawn, was used build a new, more attractive wooden castle

The castle was later rediscovered in 2017 by players

aggrievedCanine on a island not far from the border of the map at its new, hidden location. 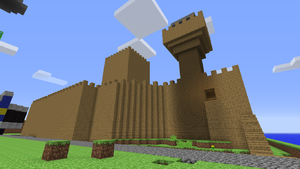 As of 2017 this is still not complete , presumed abandoned