In January of 2012, Ldog wandered into the snowy wastelands of northern freedonia. He was found and raised by a pack of wolves before striking out on his own to open a meat shop. He become a trifounder of Novum Culta a few months after joining, and has grown firm roots in Freedonia by creating several other builds. Now the CEO and co-founder of Purple Emporium, Ldog won't be leaving Freedonia anytime soon. 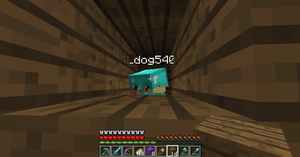 The fun will never end, it's Adventure Time! xD

Yes... Yes she has...
FlyingJellyfish woz 'ere
this is now a very long wiki page

Ldog is generally considered one of the most intelligent dogs in existance. If fact, Ldog was Confucius in a previous life. This earns him the admiration of the whole server. 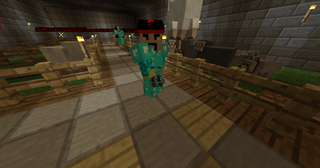 The Ldog/Confucius studies a strange item

However, it has also inspired jealousy in those who covet his exalted status.

For those who wish to follow in his path of wisdom and knowledge, Ldog offers this advice: 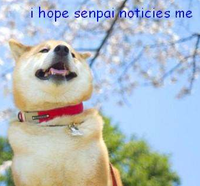 Ldog hoping that riot will notice him

Several months after joining the server, Ldog began to feel a burning desire to serve as a moderator.

He attempted to show his modly abilities by distracting griefers in interrogation and interrupting appeals. Kids, don't try this at home, it never works. Unless you're Ldog that is. He finally obtained the desired staff position in the following manner:

Ever since he was a baby, food has been very important to Ldog.

Because he is so wise, Ldog eats his fruits and veggies like a boss

Contrary to what one might expect, Ldog's physical stature does not correlate to his food consumption

Ldog is the official dog breeder of the FlyingJellyfish, a distant relative of the flying spaghetti monster.

He fulfills the duties of his post with great enthusiasm

Recently it was discovered that Ldog was a great lover and admirer of the Halo series, especially the recently released Halo 4. He is such a great fan that he and fellow admirer,

Enjoku, created a short but deeply involved recreation of the final battle between Forerunner constructs Offensive Bias and Mendicant Bias, at the end of the Forerunner-Flood War 10,000 years ago. (Link to be provided shortly)