Nazca is a former warp and man-made feature of Freedonia. The feature consists of a sand drawing embedded in the terrain. It represents a stylised hummingbird, a design inspired by the ancient markings found in Nazca, Peru, from which the warp gets its name.

It was built by

At0m1Ca15 in November 2010. The design was created using a manual pixel-mapping technique in Paint, from a simplified design in vector format created by

SlowRiot, based on an aerial image of the original line drawing.

The bird takes up a space of approximately 100x130 blocks. A sunken wall with separated measurement blocks can still be found around the 100x100 area the bird was built on.

Since the creation of the warp on top of the observation tower, various buildings have been erected around the area, notably

Rayzion's station, which lies alongside the road leading to Sigma Castle.

The observation tower upon which players arrive has gained a reputation as a suicide spot, with players jumping off and occasionally attempting to push each other off the edge. A water pool has been created under the drop, but visitors are still encouraged to look down before they jump off.

In December 2014 news was announced that the global terrorists Greenpeace had in their idiocy defaced the original Hummingbird, and in protest referential graffiti was added to this build. As of year 2021 it has been removed. 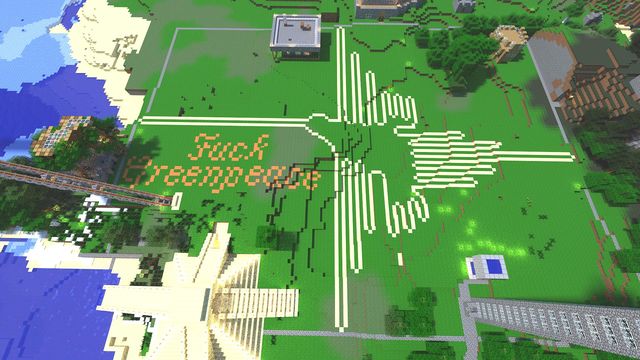