"SlowRiot is like the Santa Clause who gives toys to the good little Mods and Admins." -

SlowRiot is the founder of MinecraftOnline.com, and the poor soul who bears the financial burden of its ongoing existence. As the One who brought the world into being, and to whom all turn in the gravest of hours, he is generally hailed as the server's God.

He would like it known that none of this page was written by him, aside from this sentence.

He is renowned for implementing some of the more idiosyncratic features of the server whilst under the influence of alcohol, such as the Steve Police or the various death notification messages. He likes to be called SlowRiot or Riot. 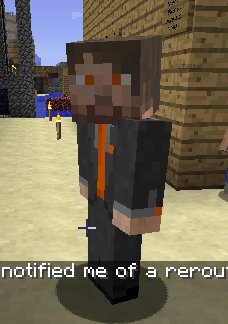 His technical abilities and sense of misplaced responsibility for the server make him the ideal port of call for bug and crash reports, major terraforming of the server, catastrophes, and the final word on server policy. Note: while the player is welcome to call, the answering response may vary in tone, for SlowRiot is often unyielding in his principles, as befits God.

He is widely suspected to have created the server in response to the knowledge that other servers would be unlikely to welcome his boisterous and fun-loving attitude towards destroying property by means of explosions, causing players to be engulfed by mobs, and last but not least his loving relationship with pyrotechnics.

Amongst other delicacies, he enjoys cask strength single malt whiskies, Piper-Heidsieck and Trockenbeerenauslese; he drives a 3L '89 Turbo Toyota Supra with great gusto, and has been known to blowtorch whole blocks of cheese into submission. He is also one of the better Dj's for MCOR

"hipster riot was online before lines were on" -

Some have claimed he is a "drunken, crazy man who wants to be god". Others have pointed out that he's already god, and there's nothing crazy about that.[dubious]

Scholars of Admin lore have recently speculated that SlowRiot may also be the second coming of the Lord Jesus christ. While clearly an active (and thus to all intents and purposes, living) admin, he also has a confirmed grave in Utopia (30m North-East of the Utopia warp). His resurrection points to only one possible conclusion: SlowRiot is also Jesus.

"who take can the sunrise, sprinkle it with beer? the Riot man can!" -

Use only in extreme cases, and at own risk.

Here are some of Riot's more or less notable constructions or contributious throughout Freedonia.