Interior of the Accord base, showing notice boards 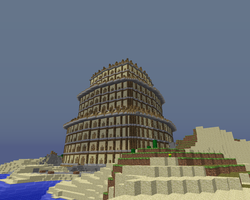 Planned layout of the Accord base of operations

Vizima being their home and base, the Accord used to be the largest Freedonian organisation, until

Liastrae decided it would be beneficial to kick all members, and one of the Heads,

Dzugavili, who then, after remaining inactive for a while, was replaced by

Kingcammy150. It is a group of PvPers, thieves and trolls who exist only to wreak havoc upon unsuspecting Freedonian inhabitants. It was founded in early 2012 by

ModernMyth7, two of which are now known as the 'Heads'. If you are to annoy the Heads, or any other member of the Accord, you should watch your back- The Accord are dishonourable, merciless killers and looters. If you are messaged by a Head in-game and asked for a duel, it is probably because they think you have a specific talent that could make you useful to the group - declining this challenge is generally met with unexpected death. After general controversy, one of the Accord heads,

Liastrae, felt it necessary to enforce a new rule, forbidding anyone in the Accord to gang-PvP. Although this is not directly against the server rules, it is not looked upon in an acceptable manor.

If you are to join The Accord, you will be rewarded with a continuous supply of diamond armour and weaponry, building materials and a free room in the Head's house, as well as knowing that if anybody kills or annoys you, they will get their just deserts. You will also be given tasks by the Heads or the Officers. Upon completion of these tasks, you will be rewarded with diamonds. The harder the task, the more diamonds you will receive.

As much as The Accord are a band of misfits, they still operate with rules. Listed here are the rules and punishments for members within The Accord:

Breaking any of these rules will result in your case being reviewed by a Head, and probably end up with the offender being kicked out and repeatedly killed & robbed.

The Accord have an internal Hierarchy, the Heads being at the top, the Officers in the middle and the Subordinates at the bottom. If you are a Subordinate you can work your way up to officer with work and respect. Due to

Liastrae removing almost all members from the group, it is now small in number, but achieves more as its members' skills are more refined. Current members and ranks are listed:

The Accord since the beginning has caused unrest in Freedonia, with constant reports of excessive PvP. Though, most of these have proven to be false.

One of MinecraftOnline's old regulars,

AlexFD, was an officer of the Accord, and caused problems within the group until his banning, which seemingly gave the group an even worse reputation with staff members and Freedonians.

When the Accord started, many of it's members were moderators and admins. After a while, and several arguments through the server, staff members left the Accord due to to the controversy the PvP had caused.

A fallout between the Accord and

Rayzion caused him to focus his attacks more on other server regulars, which resulted in outright war between him and

Rayzion then found himself dead several times following the disagreement.