'I always have buildings in hip towns, and this place seems pretty hip' -

Vizima is a town built mainly by

FlyingJellyfish and other server regulars. It is located around The Accord's Head's House. It is a moderately sized town with a PvP Arena, a Spleef Arena, farms, shops, housing and a Pigchinko Arena. Originally titled 'the Accord town', it got quite a lot a publicity when information was released saying people owning properties in Vizima would be spared from PvP by The Accord.

Many have said that they like the very neat and posh aesthetic of the town, as well as how (unintentionally) organised the place is. Houses in the town vary in size, from huge (the Head's House) to tiny (Mini Supply Huts). The town currently has nothing built in the sky, with the exception of

FlyingJellyfish's flying jellyfish, which hovers to the left of the Head's House.

Vizima started off as a little idea in

Liastrae's mind, after having built the Head's House with

ModernMyth7. He thought the grandiose building looked bare and lonely, standing alone in the middle of a desert. Thinking a booming community would suit the house,

Liastrae sought out to build a town. Day by day, the settlement was getting larger and larger. Shops sprung up, and people were buying houses like there was no tomorrow, and with help from

FlyingJellyfish, they had built a new Pigchinko arena in no more than three days. To this day the new town is ever increasing in size, with more and more people flooding in day by day. The town is also starting to get so large,

Liastrae is fond of separating the town off into districts, possibly with a Head in charge of each portion. In the future,

Liastrae hopes to have a free-form building section, with a large flat area for people to make interesting and arty sculptures and/or pixel arts, to further entice people to visit the town.

Like all towns, Vizima is mainly composed of buildings, all made by hand, with exception of the flooring, which was made using Craftbook bridges.

The Head's House is the centre building of Vizima, as well as the first and largest. It was originally made by

jonathanpanda over the period of around three weeks; a home and lair for the Accord. The large size and grand look of the building has been complimented by many, and the aesthetic was copied into the rest of the town.

There are pre-built homes that players can purchase in Vizima, they are generally grouped together and start off being completely identical- this changed as the individual players alter the homes to their own liking. When purchasing a home, the price is considered on a case-by-case basis, for example; if the Accord like you, you will get a heavy discount on your purchase, but if the accord dislike you, it may cost you up to 576 diamonds. 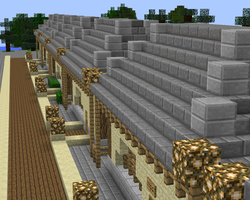 The Vizima Pigchinko arena was made of the period of three days, by

FlyingJellyfish. People often compliment the look of the arena, having patterning on the viewing areas, a half-block and fence pattern surrounding it and the look suiting the rest of the town. The arena has yet to be used for a Pigchinko tournament, though it is fully operational.

There are a total of two PvP arenas in the town; one off to the left of the Head's House, and one on top of the it. The one in-town was created by

Kingcammy150 doing the arena floor and redstone circuitry. The arena is rarely used, as members of the Accord are currently focusing more on continuing the development of the town, instead of honing their PvP skills. The arena on top of the Head's House is practically never used, due to it's awkward positioning and basic look.

The Vizima spleef arena is a small-time arena which will only work if there is no lag whatsoever. You need shears and patience to play the game properly, as well as at least three people at one time; one to control the levers, and two to play. If you manage to play a game, your inventory will then be cluttered with wool, as there is no chest collector on the underneath.

Farms can be found throughout the town, filling strange-shaped gaps in between other builds. There are currently only a couple of working farms. There are spaces for another three, but they have not been filled as

Liastrae has little knowledge when it comes to automatic farms.

There is currently only one operational shop at Vizima, the Red Lion pub, owned by

SlowRiot. Out of the other four spaces, three are reserved for

thesprazzzler and PurpleEmporium. Shop-slots are free, as long as you maintain stock and look after the place, if you want to use one of the spaces, you will need to talk to

Several people have bought properties in Vizima, so here is a list of the current residents: