'You used to be a dick, but now you're all sunshine and rainbows.' -

Liastrae is a well-known regular, spending most of his time wandering around, building, PvPing and failing to produce quality Greports. In the past, Liastrae has been known for heavy amounts of PvP; he is currently the leader of the group Mortis Vivos, and was previously the founder of the disbanded group, The Accord. After an in-depth interview with the Voice of Freedonia, it was reported that, 'After some recent self-reflection, Liastrae concluded that his large amount of PvP had been “damaging the Freedonian community”, and has vowed to stop. As for his reasons, Liastrae says that he “no longer wants to be affiliated with those like dethshok and AlexFD.” He will instead return to what he did when he first joined Freedonia: building, helping the community, and welcoming players to the server.' However, this vow was bound not to last, and in less than a year he was rooted again in the dark side.

Liastrae has been voted Best Troll three times consecutively, and Best PvPer twice, to which he is still smug and astonished.

Liastrae regards himself as a cynical pessimist, though recently has been getting better at complimenting builds, due to the amount of time he has spent with the kids on

captbunzo's server. He enjoys talking to people and considers himself quite a social character, though his sense of humor is only perceived correctly by a handful of people, as it relies 98% on sarcasm.

'If they're natural life, cut with strife; but placed by man, expect a ban' -

On the 15th of August, 2012, Liastrae was promoted to Moderator. For many of the residents of Freedonia, including himself, this was a surprise considering his love of trolling and PvP. At the time of the modding,

SlowRiot was attempting to decapitate

Liastrae with an extremely potent weapon. A cat-and-mouse situation occurred, with

Liastrae eventually being torn from the mortal realm. Upon resurrection, his name appeared cyan.

After serving five months as a staff member,

Liastrae resigned on the 22nd of January, 2013. A heartfelt e-mail was written to all fellow staff members, but due to problems with the system at the time, nobody received it. In order for

Liastrae's kind words to be read,

MattyQ manually forwarded the e-mail to all the staff. There were several reasons surrounding

Liastrae's resignation, however the main one was stress induced by mounting pressure to behave like a reasonable human being. 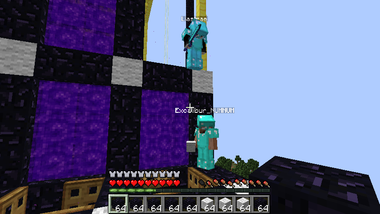 Liastrae is known to do a funny impression of