Mycelia started as a staff-only village founded on 9 February 2012, and was opened to all players on Valentines Day (14th Feb) 2012. Located in the largest mycelium biome discovered in Freedonia as of the second border expansion, it was chosen as the site for a small partially themed village.

The region is notable for its large expanses of open water punctuated only by small islands; navigation in the region is primarily by boat. 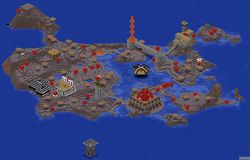 slightly older map view of the city a few days after its foundation. Note absence of railway station and tunnel. 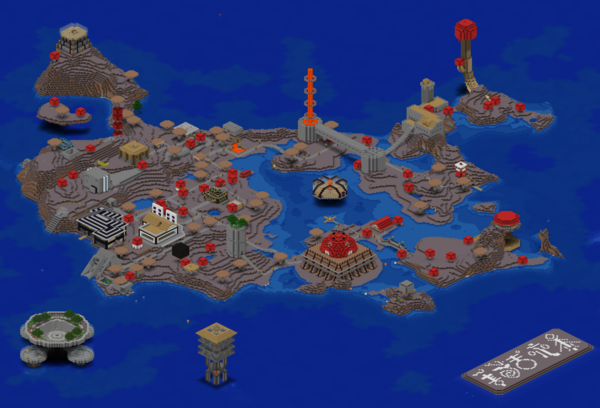 A rail link is currently being built to connect to the mainland at the end of the Lavatown Line of the Freedonia Railway System; a railway station is under construction at the time of writing. Railway bridges have been completed as far as the Wilderness Preserve, but later demolished due to complaints about the view; instead they have been replaced with a series of spectacular underwater tunnels.

At least one of the houses has a nether portal, for faster but more dangerous nether travel.

Starting at a pier in the lagoon, the orange and white buoys of the Lothendal Boat Route guide the way to Al Wahat, Port Dhal, Lava Town, and many other destinations.