From MinecraftOnline
(Redirected from User:Runechan)
Jump to navigation Jump to search

Runechan on a snowy mountain. 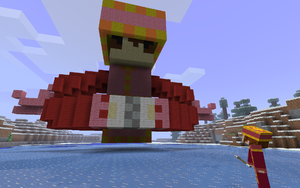 Runechan gazes in awe at her (since outdated) statue on the Isle of Muu. 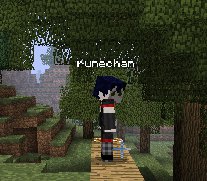 SlowRiot's second in command, the hand of God who carries out His commands. She specialises in griefchecks, thrives on politeness and cured meats, and dislikes intensely being reminded of the existence of the spawn cactus.

You may call upon her for help with French homework, vocal opinions on mainstream and underground cinema, and for help identifying a griefer. She also deals with the post-grief process, reimbursing items and contributing to repairs where appropriate, such as removing unwanted lava or water.

Her name is a combination of her forename and the Japanese suffix -chan, denoting endearment and kawaiiness. It has been conjectured that this is also a reference to 4chan. However these connotations fail to convey the dangerous nature of her righteous wrath when it is aroused - it is best to attempt a process of negotiation or capitulation to bring the experience to a swift end.

RuneChans house is a dome similar in size to the daughter domes in underworld (e.g. 20 blocks radius) made from obsidian around the outer dome, with random torches placed over it so it appears like stars in the night sky. The floor is made of red wool with inlaid patterns of runes made from pumpkins which circle a central pool in the middle. This pool is half lava on one side and water on the other.

No door into the house is visible, so movement is assumed to be by warp only.

Status as of late

Runechan has gone off to do her own things. Whether or not she will return is unknown.