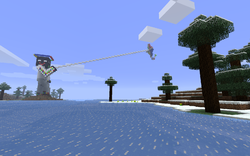 ToneDial fighting Bastet for control of the Reed's destiny

Many revere him as a Deity, a demi-god, a Lord of men. ToneDial is whatever you need him to be. Unless you need him to be lower than you in status. ToneDial is the proud banhammer of Freedonia, racking up hundreds of personal bans. In response to grief alert he is swift, cunning and operates with the utmost dilligence. Of course having such power is obviously linked with instability, ToneDial is well known for causing an uncountable number of apocalyptic events. Some of his more notable achievements include The Cactusclysm, The Great Flood, The Snowstorm and the Stone Disk of Spawn as well as the Slime Invasion of AmpCity. Objects/players on the receiving end of one of ToneDial's "little accidents" are considered to have been "Tone'd."

As a young man, ToneDial always knew he was destined for great things, thus he set off into the minecraft world looking for a place to call his own. Firstly, he joined a large server that imposed heavy rules and supressed his free will, ToneDial was not a fan of this but he gave it a try nontheless. Unfortunately, after spending a total of 37 minutes on that server, he came into possession of a Flint and Steel, and somehow found himself at the most notable construction of the Server; A tree that spanned the height of the server, and an immense width. After climbing to the top, he noticed a chest, unfortunately, he right-clicked the tree by accident. The world was not fire protected. What occurred next was intense server lag and an inevitable IP ban. This was the first, but far from the last of a series of little accidents. So, our brave hero set off in search of a new land, one that he could hopefully not destroy.

ToneDial was once a feared moderator, but he grew lazy and power-crazed after ascending to the rank of Admin. He was punished by the righteous

SlowRiot for his misdeed. Stripped of his power, status and honour. After a lot of soul searching, ToneDial understood how wrong he was and delivered the following speech to the denziens of Freedonia:

I have something to say.

There was a time, when I was among the greatest and most competant men in Freedonia.

Yet I have let myself grow dull and lazy.

As my power and influence grew, my helpfulness and competance fell.

I became a trickster, who played with his powers. Often ruining the lives of many.

As a result of this, I lost my powers, my status and my pride.

I am formally announcing my intent to return to my former self, to once again be worthy of Pride, status and power.

To never abuse this power, should I get it again.

The name ToneDial will once again strike terror into the hearts of men!

After spending several months away from Freedonia, he returned.

Finding a vastly different and unfamiliar place, and with much more work to be done in a distant land, he made the choice to resign from his post of Godhood.

This is not to say that he'll always be gone.

Once ToneDial is done with his business elsewhere and feels he can dedicate himself to the noble cause, he will surely make a triumphant return.