Game City is an establishment created by

twinchicken86, and features, guess what, games. There are a variety of different things to do.

Game City features seven completed games, and two works-in-progress, all of which are described below.

The Blocky Stadium is the largest and first-built structure in Game City, and is therefore also Game City's crown jewel. More info can be seen here.

The PvP arena is a small indoor arena, and features a square area designed for two players to "Maul each other" in front of a crowd of spectators. There are two shop stalls outside of it, one owned by

nodoka_miyazaki and the other unoccupied. Despite its small size, it has enough space in the bleachers to hold quite the crowd. Twinchicken86 reports that he is designing a new & improved PvP arena to possibly replace the existing one. The PvP arena was designed and built entirely by Thebiologist13. 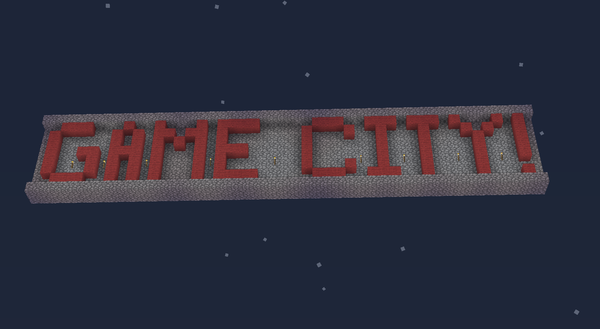 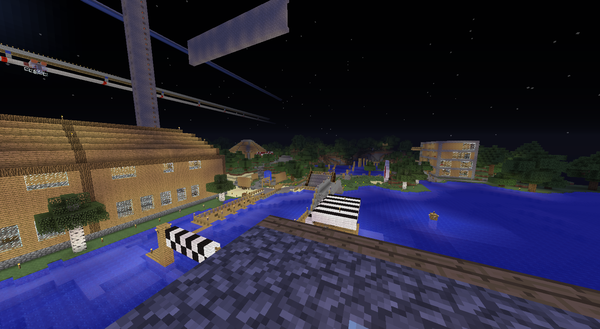 A view of the city from atop the Bumper Boats.

The Archery Target is a short-range, easy difficulty archery course. The bullseye contains an oscillating piston (causing it to appear and disappear every few ticks), and the archer stands in flowing water when playing, forcing him or her to draw and shoot quickly before being pushed behind an obstacle. The Archery Target was designed & built by Thebiologist13.

Game City's Parkour is a short, medium-difficulty parkour. It is the only feature of Game City whose designing and building were a joint effort on the parts of Thebiologist13 and Twinchicken86. It passes over, at its furthermost point, a Shypixel head embedded into the hillside, seen at the bottom right of the screenshot above. It is more of a jump-timing parkour than a jump-accuracy parkour, as it has only one large fall, and that is into three blocks deep of water. The current record for one lap is 41 seconds, held by Twinchicken86.

Game City features a medium-length, challenging boat racing course. It is designed for five players in boats to maneuver themselves around tight corners and through "turbulent waters", all while trying to be the first one across the finish line. The Boat Racing course is the northernmost attraction in Game City and probably always will be, as Thebiologist13's house is roughly 50 meters farther North. This boat racing course was designed and built by Thebiologist13, although Twinchicken86 says he plans to add more boat racing in the future. However, knowing the number of projects Twinchicken86 has all going on at the same time, this probably won't happen for a while.

The Bumper Boats pool was added to the Boat Racing dock by Thebiologist13 as an afterthought. There is not really much to be said here; four players in boats all ram their boats into each other; the last one in an intact boat wins.

The following games' constructions have been started, but the games are NOT open to the public.

Game City's spleef arena has, so far, been built totally by Thebiologist13. It will be a craftbook-based spleef arena, and have a balcony for spectators. Once it is finished, it will be the second largest completed structure in Game City.

The Capture the Flag Field

At the time of writing, the Capture the Flag field is just a giant rectangular field with a water channel in the middle, enclosed by a 2-block-high fence. Twinchicken86 built the fence, and is "unwilling to disclose information regarding future plans for the CTF field". In other words, he has no idea what he will do with it.

The Game City Hotel was designed and built entirely by Twinchicken86. It sports twelve rooms, eleven of which are for sale. It has four very large rooms (costing 7 diamonds each), 4 large rooms (Costing 6 diamonds each), and eight smaller rooms (Costing 5 diamonds each). Once a room has been bought, it has been purchased permanently. Each room is pre-furnished with at least one chest, one furnace, and a "table" (Consisting of stairs for seating, and pressure plates atop fences for table surface). Many rooms also feature paintings, and all have large windows. Twinchicken86's Penthouse also has a custom balcony attached to its outside.

There are a couple of ways to get to and from Game City. The original way to get there was to make the 750m walk from MountJackal (Which really turns out about 900m). However, Thebiologist13 built a long rail link from a station just outside MountJackal to Game City. It is entirely underground, and takes just a few minutes from MountJackal to Game City. Recently, a branch of the Sprazz Route boat route was added, leading from the Sprazz Route to a dock behind the Game City Hotel via the Voxel Centurion Canal.