View of the town during the day

Hillvalley is a 'medieval' themed town. The city can be very active at times, generating vast wealth which has been known to create dangerous conditions due to PvP activity. The town storeroom offers free materials and items for players visiting the town. Residents are encouraged to donate to keep the chests fully stocked.

Before the warp point was established the town was known as Raggamoth, a name formed by combining those of the city's two founders,

Palace of the Skull 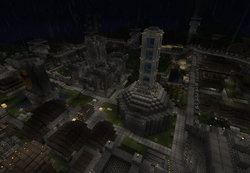