Strom Isle is a secluded island created by

stromhurst. It has grown from being a small group of houses, to a vast homeland to many players. Moderators and admins have built here too, so be on the watch for their epic creations! There's lots to see and do, and everyone there is very friendly. Be sure to drop by today! 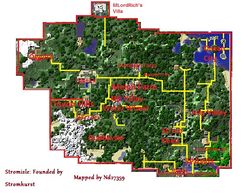 A hand-made map of StromIsle, by

The town first started in March 2011 with the founder,

stromhurst, first starting the server. A quick house made from dirt and a tree was made to shelter Strom during the nights. This shelter was made at the Isle's highest point. A month later, Stromhurst transformed the island by hand to a large town, surrounded by a large, stone wall. A basic railway system was added, and Stromhurst set up a larger and more efficient base of operations. Strom Isle's first resident,

Comixnik, joined in April 2011. It was from then on that Strom Isle started to become public. Strom Isle eventually got a Vice President,

MLordRichM, who has been taking care of the island alongside Stromhurst. Together, they've made it to the great island you all see today.

This is the main hub of Strom Isle. The town's /warp point is located here, as well as the majority of the buildings. It is always being improved on, and lots more features are being added over time too.

The Mail Center is a large tower that rests in the centre of Central Strom Isle. It was built by

MLordRichM in the early stages of the town. This acts as a central community spot for all residents. Here people can find their own mailboxes, and a noticeboard is available to write public notices on. The tower also has a staircase that goes all the way to the top, where one can see all the views of Central Strom Isle. Do not try jumping off it.

The Park of Procrastination

The Park of Procrastination is a small glade, built by

Comixnik, situated just along the path leading up to Comixnik's house. Here, you can rest your weary feet, and sit on the benches, whilst thinking to yourself about a question you've always pondered. The park's purpose is in it's name.

Stromhurst Keep is one of Stromhurst's many places of residence. This is a grand structure, built into the side of a mountain face by

The Railway Station is accessible via the warp zone. It allows the user to ride a minecart around, seeing all of Strom Isle's greatest sights. Admission is free, so it's worth a shot! And it's cleaner than any other railway station you'll come across. In fact, it won an award for that.

The Artificial Jungle is pretty much a bunch of planted jungle trees where a plain used to be. Nothing else special. Although, Central Strom Isle changed to a jungle biome in the 1.2 update, so Ocelots can now feel right at home. It's a jungle out there.

The Complex is a secret underground place, where only the residents of Strom Isle have access to it's facilities. There is a Tree Farm, a Cobble Generator and an XP Grinder, just to name a few. The complex is located near Stromhurst Keep.

Mill Valley is a notable valley towards the West of Strom Isle. It is known for it's farms, spring water, and an unhealthy amount of Creepers.

Matty's Mill is a public farm created by

MattyQ, located in Mill Valley. It is well known for a large Windmill, that resides at the entrance. The Windmill is what gave the valley it's name today. I hear there's some juicy melons over there. Must be worth the visit.

The Watermill' is another farm residing in Mill Valley, which was built by

glitch80. Here, one can relax to the peaceful sounds of the water flowing against the water wheel. It's a shame the water wheel got jammed after Stromhurst wedged one of his cookies in there. It hasn't turned ever since.

The Mines of Strom Isle are located all over the island. A public mine is located in Mill Valley. Be careful what you do down there; there are rumours of a Balrog lurking around. Or it could just be one of SlowRiot's hangovers. 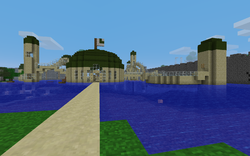 Ocean City is a complex built by

FlyingJellyfish. It is half submerged in water, hence getting it's name. Some of the buildings are located underwater too. Around the back of it, there is an exit to the sea, which links up to one of the boat routes one can ride around. Also, beware the giant flying jellyfish. It'll give you quite the shock.

Samoroth's Tree is a tree. A big one. Who would have known. It was built by

samoroth, and it is located near Ocean City and The Complex. The dense woodland surrounding it makes it a perfect location for the build. I wood definitely recommend going there, so you'd better leaf for it soon.

There's lots more things to discover in Strom Isle! It may not be on the wiki, but it doesn't mean it's not amazing! Why don't you explore the island, and see what you can find.