"It's about fucking time I built a house" -

Twinchicken86's house is located in the area of the servers Northeastern ocean which will eventually become TwinCities. It was built in late 2013, after Twin had been playing on MCO for almost two years, and was his first ever house on the server. As of November 2014, all that is in the house are 3 auto-smelteries, a hallway of sloppily-organized chests, a chicken, and quite a few cakes.

When twinchicken86 was promoted to moderator on July 28, 2014, TheDarkrai85 decided it would be a good idea to fill most of Twin's house with cakes... 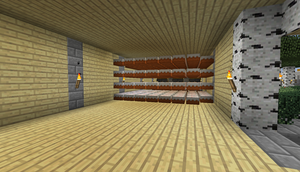 Cakes on the ground floor. 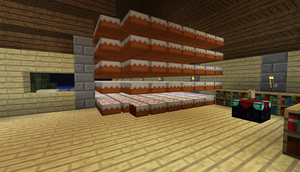 Cakes on the upper floor.

The Toppest of Chickens

Palindrome7 to do him a favor and spawn in a chicken riding a chicken - a twinchicken. Twin proceeded to build a small cage of glass panes to house his prized double chicken, but one day, Billy the Top Chicken mysteriously died and disappeared. However, thanks to a few signs, Billy's memory will never be lost. 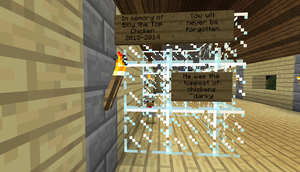