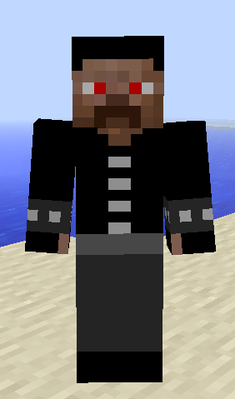 Dorn284 glares with hatred in his eyes

"Honestly, I donated just so I could set assholes on fire." - dorn284

Dorn284 is an aether donor who enjoys above all else building dungeons that are destined to slay many players hoping to plunder them. So far only one such dungeon is complete due to IC restrictions preventing him from utilizing his true evil genius. When not building dungeons, he enjoys assisting his friend

zfleming1 in patrolling for griefers and the potential damage they may have caused. On 29 June 2011, a drunken admin raised dorn284 and

What's in a Name

"dorn is secretly a gold shovel" -

Dorn284's name came about rather simply. Dorn was the original name of his first Dungeons and Dragon's character, a Lawful Evil dwarven monk. He has been partial to the name ever since. the 284 is harder to pin down however. Some say it's the number of people his character killed in D&D sessions. Others claim that he believes it to be his lucky number. The truth however is that it is the locker number of a girl he was sweet on in High School. Even though they never got together, he still remembers her fondly. Mocking of the young lady or his fondness for her memory usually leads to a long and bloody death.

Dorn284 has several homes scattered around Freedonia. No one can say for sure where they all are. One place he can be found for certain however, his home away from home as it were, is his office in the *S*T*A*R*S* building. There he has been observed to sit behind his desk and prepare paperwork for the next inevitable griefer he manages to find.

Dorn284's past projects include the *S*T*A*R*S* building, the Monster Dungeon(tm), multiple houses and the Community Board currently at spawn. His future projects include a Trap Dungeon(tm) currently on hold until he can bribe an admin to assist him with the last room, a Skill Dungeon(tm) that he is still plotting as well as numerous classified projects. He has shown several of the classified ones to new players. Their bodies were never found.

Speech Upon Promotion to Admin