"Dorp is a person who I begged to put a quote on their wiki, here I am lol. Also dorp has a massive dong" -

If any instances are found, they are to be immediately contained in a 10m x 3m x 10m containment cell at Site-19.

DorpEngineers are a species of now extinct animals belonging to the genus Homo. DorpEngineers spend it's day gathering red wool or lurking around Newport or North Of Nowhere. Periods of activeness are between November of 2019 to October of 2020. Last known instance died in October of 2020.

DorpEngineers mainly feed off of attention. The way it converts attention into energy is unknown. A notable effect is that when active, DorpEngineers' intelligence will drop significantly. During long periods deprived of attention, they enter a dormant state known as 'Minding it's own business'. During this period, it will stop reacting to external stimulus, and start gathering red wool, presumably to build nests. However, recent investigation have shone that the red wool is used to build a mapart. The reason for this is yet to be understood.

They often wear unenchanted diamond armor, even if better equipments are provided. It would always carry a severed genital of another DorpEngineer. When it does not carry one, it would go into hiding, presumably to obtain a new one. It would also carry a pickaxe, with various names. DorpEngineers seem to be attached to these pickaxes, and when their durability run out, will experience a brief period of depression.

The most used burrows are a small den under Forrrest, and will store some more valuable items here. However, it is rarely seen at this burrow, as their preferred location is Newport and North Of Nowhere. They will sometimes build structures known as farms. 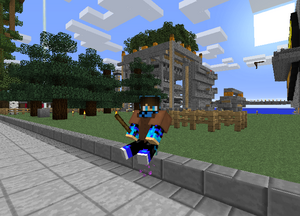 Instance spotted near North of Nowhere, seemingly in dormant state. Instance jumped into nearby lava pit when approached.

When speaking, it will lapse into periods of intellectual disability. Testing have shown average IQ during active periods and 15. It's preferred topics includes genitals and dumb things.

On September 9, 2020. DorpEngineer was banned by having player radar enable on his mini-map which is consider as cheating.