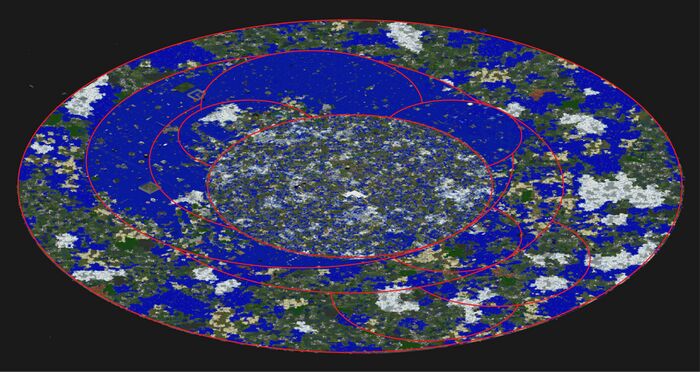 Freedonia with all borders added, September 2021

Freedonia's border is a barrier preventing players roaming too far from the spawn and central inhabited zones and increasing world size extremely. Since 25 August 2021 it is a single circle with radius of 21000 blocks, centered on Central Nexus. 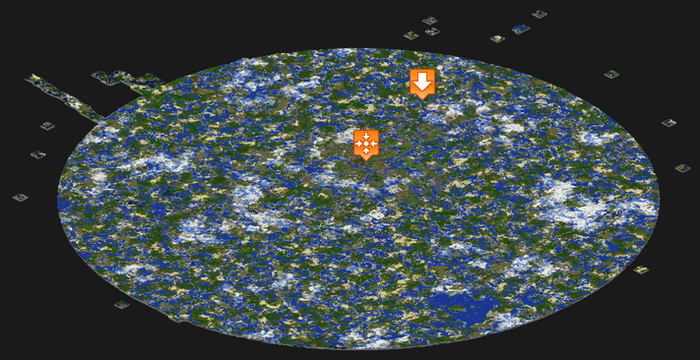 In the beginning, there was a simple large circular border with the only one big ocean, as shown in the second image below, which had been generated in 1.0 version after most of the original area was discovered earlier. Total square of this area was 254 469 005 blocks or 254,47 km² and after all expansions it has increased more than 5 times.

The need for a border

Initially Freedonia, in keeping with its name, was left unlimited and unbounded. However, some players chose to walk for hours in a single direction, leaving ugly trails of discovered land on the map, which served no purpose but taking up disk space. Initially this was tolerated, disk space not being a serious issue as hardware was upgraded over time.

However, in time it was realised that Notch was planning a schedule of updates which would alter the way terrain was generated, and introducing new block types. As Notch introduced clay and lapis lazuli, it became evident that leaving territory discovered early would be a wasteful exercise, as it would prevent that terrain from having any deposits of future materials, or new landscape features. The advent of early mapping software also demonstrated the full extent of long linear protrusions from inhabited space out into nowhere.

It became evident that a border would be needed to prevent these "spider legs" from limiting the diversity of future explored terrain, and to increase overall concentration of inhabited terrain. The administration felt that it would be nice to be out in the wilderness, build your home, wander over a hill and find another player-built village nearby; if players were suitably contained then there would be greater cooperation, more impressive villages and cities would be built, and the overall quality of gameplay would improve.

Of course the border had to be big enough that the illusion of unbounded wilderness, which is one of the core concepts of Minecraft, would be maintained. It was mandated that the border should not be obvious to any location that has already been discovered, and that most players could spend all their playing time without ever coming across the border at all.

Inhabited size of Freedonia at that point was around 9 km in diameter, so a circular border was created with an 18 km diameter in March 2011. It was not centered on spawn, but rather on the average centre of the inhabited zone, based on a great-circle encompassing the furthest outlying warps, which were at this point AmpCity, Forbidden Outpost and Caverns. A circular border was chosen to preserve the most natural shape and aesthetic map display.

The centre of the border was thus decided as -1817, 1711 (map link), and it is no coincidence that this is also the location of the Central Nexus.

The existence of the border was not revealed at the time of creation, in order to preserve the impression of infinite space. As the border was gradually discovered by some, the shape of it was plotted on the map and over many months, the circle filled out.

At the start of December 2011, Minecraft 1.0 was released with some major terrain generator changes, along with the addition of NPC villages. It was decided to expand the border once all terrain in the existing Freedonia circle had been discovered, and this indeed happened a few weeks later (the largest area of 1.0 terrain in Freedonia being the ocean around Qarn Al Katra which was discovered during this period.

Rather than expanding the border linearly, which would have maintained a dull shape for exploration, and generated an ugly concentric ring, it was chosen to expand the landmass with a set of smaller circle sectors, finally opening out to a smoother overall shape.

It was also decided to expand the map in stages, with each of these circles being opened as the previous one is fully discovered, so that fresh terrain would always be available but expansion room would be limited at the same time, to allow the most time for future terrain feature updates to be included. 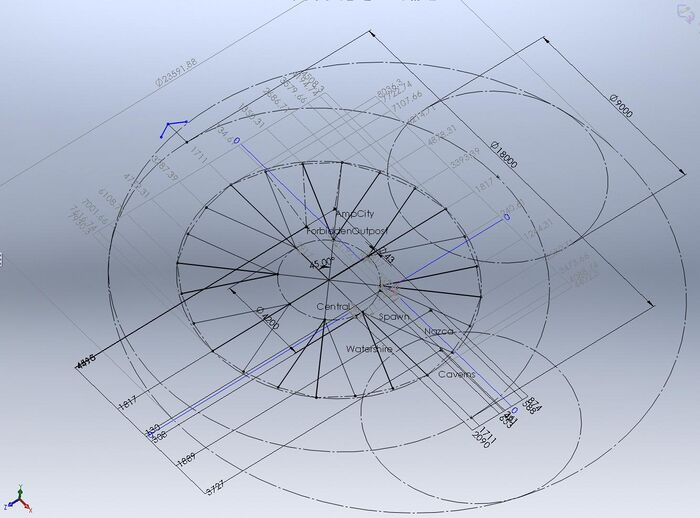 A solidworks calculation of optimal hub locations for Project Anubis, showing the original 18 km border and 1.0 expansion 4,5 km radius areas at the east and south (now north and east), and the eventual unification 24km border planned (never made). 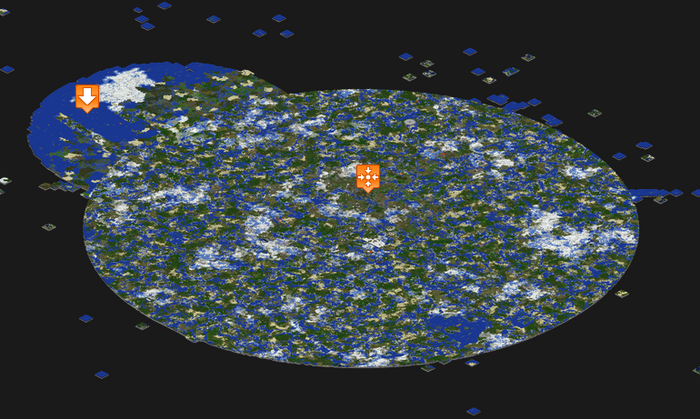 The map view of Freedonia from Jan 17 2012, showing the December 2011 border expansion.

Although no major terrain generator changes were introduced in the 1.1 update, this coincided with the filling of the phase 1 expansion circle. So new border increasement happened on January 17, 2012 and was also 9 km in diameter like the phase 1 expansion, and is centred on 7183 1711 (map link). It has added same area, as previous expansion.

After exploration, the majority of this region proved to be ocean. A notable settlement is Mycelia located in the largest mushroom biome discovered. Another is the free-floating Novum Culta, the most remote rail route in the past. There are also two square islands of pre-0.9 terrain floating in this ocean area, making a stark contrast from the surrounding ocean - one has been branded a Wilderness Preserve. 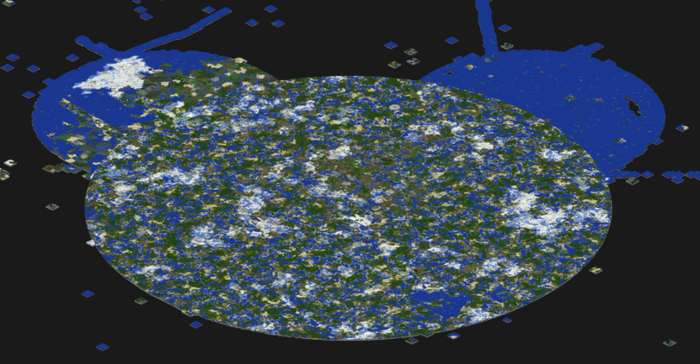 The map view of Freedonia in March 2012 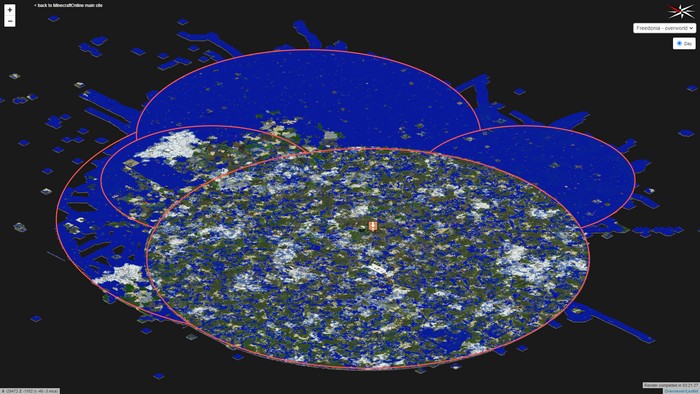 All expansions listed above

On the 25th of April, 2013, a new larger bubble was created by increasing previous circle from 9,5 km radius to 13,5 km, so it reached the north edge of the Phase 3 expansion and south edge of the original Freedonia circle. This expansion made obsolete the 1.0 expanded border, since it is now fully enveloped on all sides by further expanded territory, and brought area of 141 390 822 blocks (141,39 km²). The motivation for this expansions was not terrain generator changes as previously, but simply a desire for more unexplored terrain to found new settlements, as by this stage all previously available areas of Freedonia had been explored and colonised. 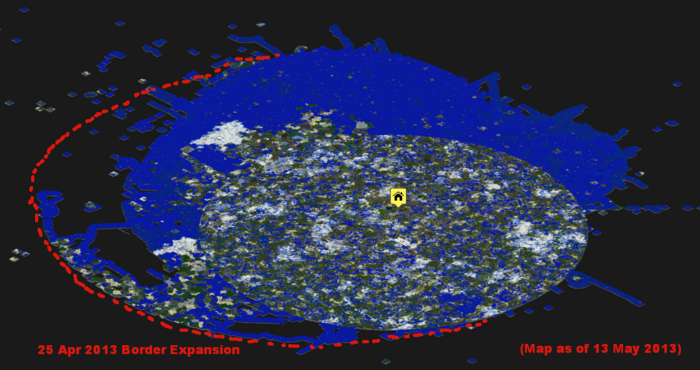 April 2013 expansion, only partially explored two and a half weeks later

On October 25, 2014 the first expansion in a long time, initially a probing 9 km diameter bubble was created into unexplored southern territory, accompanying the 1.7 version upgrade. It added area of 34 064 932 blocks (34,06 km²). This led to the foundation of semi-natural settlements such as Acacia Roads.

October 2014 initial expansion, fully explored in only a few days

Since the prior expansion was fully explored so quickly, it was decided to expand the border again, more generously, to satisfy the demand for new biomes. A larger 27 km diameter bubble was opened centering at the centre of Freedonia, the Central Nexus, bringing into its circle several of the smaller bubbles and simplifying the outline of the explored map considerably. It brought area of 81 721 114 blocks (81,72 km²). 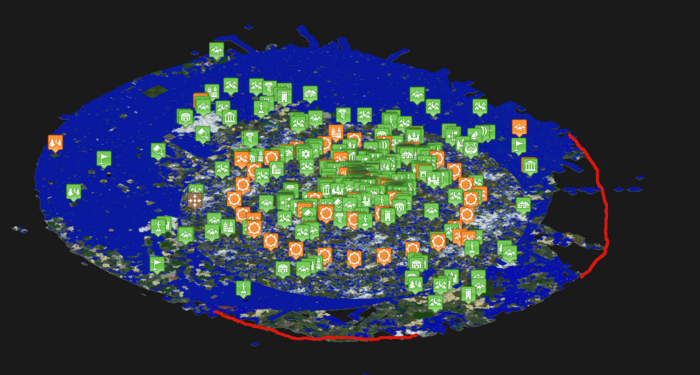 November 2014 expansion mostly fleshed out, with the new border shown in red 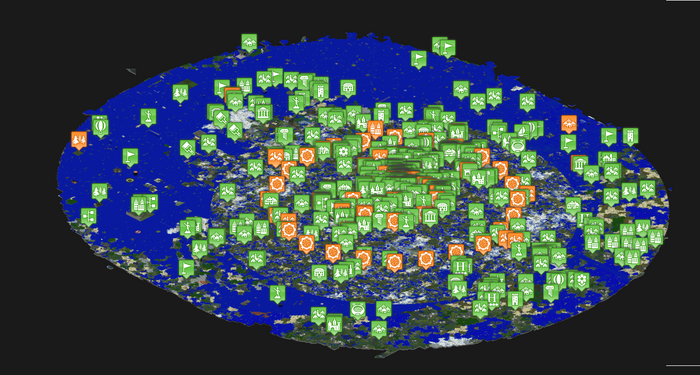 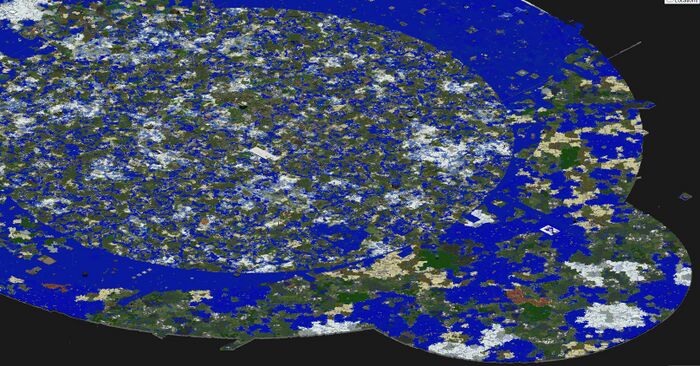 South part of Freedonia in August 2018 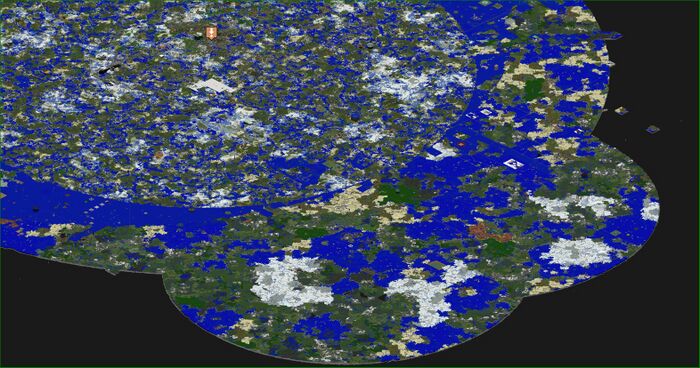 South part of Freedonia in June 2020

Many years have passed since first plans of smoothing the whole of Freedonia into a continuous circle and it has finally happened on 25 August 2021 5 months after 1.12 update. New land with radius of 21000 blocks and centre at -1817 1711 encompassed all previous expansions and turned Freedonia into a disk once again. It added area of 582 565 501 blocks (582,57 km²) and became the largest expansion in MCO history. In this lands first natural Strongholds with End portals and Ocean monuments were generated and discovered. 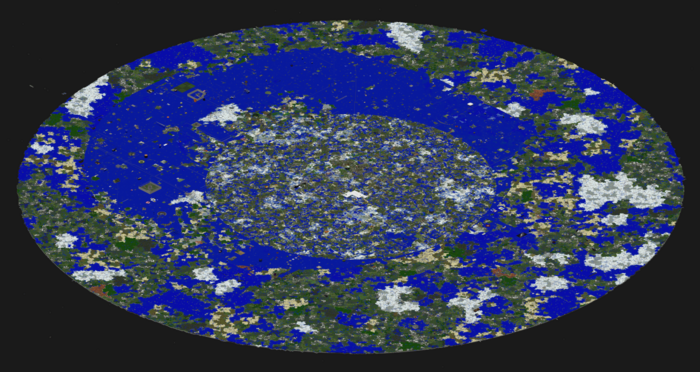 View of Freedonia map on 1 September 2021

There is no certain plans for the future. Depending on new versions biome additions and terrain generator changes new land may be added.