Acacia Roads is a group of natural villages and desert temples, linked together by a scenic acacia-lined gravel road through a desert, separated by winding rivers. The area is home to an unusually high concentration of NPC buildings. The roads are noted for their scenic routes and gently curving bridges.

The road was added to link up the adjoining and largely unexplored natural constructions at the time, and encourage visitors and additional builders. 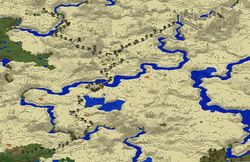 Temple on the road towards Vizima

The natural landscape in the vicinity

Stable next to a bridge

The hub of the region, this busy desert village was re-paved by Riot upon discovery. There is a steep desert cliff to the north that the road winds up.

Desert NPC village across the river to the north

The road climbs over the mountain and overlooks a river valley until crossing it via a delicate cobble bridge, leading to a small desert village in the north.

Castle to the East

The road links to Azurban,

Desert temple on the plains, south-west

The road continues west across a small bridge, leading to a desert temple out in the open, with a broad courtyard in front and surrounded by acacias. This temple was initially discovered by

Discovered and excavated by Riot, this temple was initially buried entirely below sand and sandstone, showing only the corner of one tower. Subsequently claimed by

fthtjyjy. Due to the difficulty of separating a sandstone temple from a sandstone hill, it was decided to expand this into the hill to create a dramatic hillside fortress in the desert temple style.

NPC village far to the west

The first part of the region to be discovered, this NPC village was first explored by Simmuel, and later re-paved by Riot but otherwise left intact. A road links this to the half-buried desert temple.

Desert temple far to the south-east

Newly discovered during the process of colonisation, this outlier was the last part of the region to be linked by road, with Riot and

Mystila to connect the roads.