This was founded by two Austrian players, Tank_AUT and xxVegasxx. When first discovered it was only a valley overlooked by a rather impressive mountain. Today it is a quiet and peaceful town only a short distance from spawn.

After a particularly successful mining expedition Tank_AUT and

niepay had so much lapis lazuli they made blocks of it and used it to pave most of the streets in the town.

Since its opening Casa de Austria's population has increased to five including the two founders. There are another two people who have contributed to the community, but do not live in the town.

The community is friendly to visitors and offers a lot of support to people new on the server in the form of public farms for sugar cane, cactus and a classic mob farm for experience. An interesting feature of the mob grinder is that it is configurable to suit the needs of the user.

The two founders had a plan to reproduce St Peter's Basilica of Rome as a scaled down model. They took it to a certain point but left the server before completing it.

On April 3, 2014, the St Peter's Basilica project and the required territory was given over to

The Canal and the Canal District

The canal was started on 20th of April, 2011, by Tank_AUT to provide water access between the Casa de Austria harbour and the ocean. xxVegasxx and Crux_T helped in its construction.

At the same time an area of land was terraformed by

Crux_T on both sides of the canal. A small island was included as a home for Crux_T (citizen) and a secondary home for KingofCheeseland. Crux_T also provided several communal buildings including the Bridge that spans the canal. 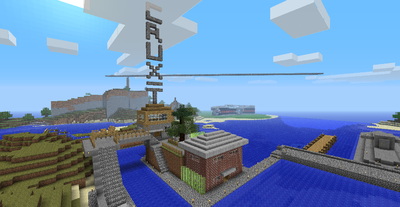 To improve the town Crux_T added a minecart transportation system to provide fast travel to various places around the town. From the central hub players can ride to these destinations:

Each line is double 2 tracked, labelled at the stations as Send and Receive. The first line constructed was the one from the Hub to the Canal, followed by the line down into the pit.

The main engineer is Crux_T. XXVegasXX built the Main hub, with help from Tank_AUT and Crux_T. Kingofcheeseland donated the bulk of the needed resources and also provided technical knowledge. Tank_AUT and Lacrosse1991 also donated some iron and gold.

Originally just an ordinary island, this area of land was claimed by Tank_AUT by placing a flag at the highest point.

It is now under a period of intense terraforming by Crux_T, the first person to build an actual building on the island. The main plateau now has staircase so you can reach it from the ground and has been widened extensively and roads have been put in so others may build upon it.

Main features: The Pinnacle: Reachable by walking up a small flight of steps from the main level of the plateau. This is the site of the Flag which Tank_AUT placed, therefore claiming the island.

The Main Plateau: Reachable by walking up a big flight of steps, this cobblestone paved area of land has been extensively widened by Crux_T.

The Lowlands: Below the plateau is an area of lush, grass filled land which slopes gently into the sea. This area has yet to see any human construction. This area has been mined in certain places for resources although these are well hidden.

The Serpentine Cliffs: A series of perfectly flat cliffs winding around the Northwest corner of the Island, Crux_T named them after a group of reptilians, the Snakes. They are a Natural wonder and are not to be mined.

The introduction of pistons in Freedonia spurred the construction of a number of new farms and machines in the newly created Industrial Quarter of Casa de Austria. Already constructed and working: