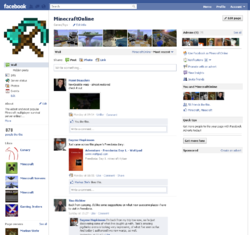 Sharing text on Facebook with simple drag and drop

MinecraftOnline had a Facebook page, where the administrative team posted news and updates about the server and its features. It has since been deleted at the request of Mojang Studios.

Players were invited to post in-game screenshots, videos and other experiences there. It was possible to browse the photo galleries, relevant links and get updates about new events

Occasionally competitions and giveaways were held around the Facebook page. Past examples have included:

Facebook "like" buttons had added to every page on the website, as well as every wiki page - they could have been seen at the top and bottom of this one, for instance - enabling you to easily express your approval of, or share, content on every part of the site.

In addition, the Meebo social networking system was integrated into the site features quick links to the fan page, and enables sharing of content such as images by simply hovering over them and dragging them to the Facebook icon, or doing the same by highlight-selecting text on the main page. 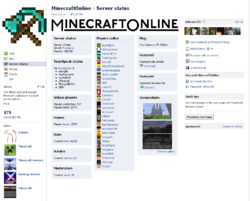 Always with our finger on the pulse of modern culture, MinecraftOnline developed our own Facebook app. This used to display a great deal of information about the server's present status, within the comfort of facebook. Information such as the list of players in-game and players on Teamspeak can be easily accessed without the need to go to the main site or enter the game or IRC.

A tab on the control panel used to enable players to connect their MinecraftOnline account with facebook; this let you easily see which players in-game were who on facebook, of those who have similarly opted to link their accounts.

Facebook was just one of many communication methods used on MinecraftOnline. Others include: