MinecraftOnline has an IRC channel for realtime public discussion: 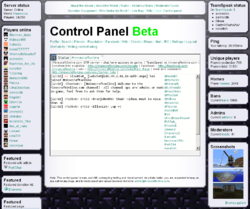 A message from a IRC bot viewed from ingame

There is a selection of bots running in #minecraftonline at any time. They may be given mode +v (voice) to separate them on the users list.

McObot is an IRC bot designed specifically to relay messages between the game server and the MinecraftOnline IRC channel. It was written by

Drathus42 and then later by 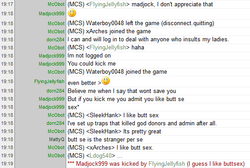 A typical day in the life of an IRC regular

(No longer in use) Was Managed by

(No longer in use) Managed by

(No longer online) Managed by

Relays chat to and from IRC and Discord.

Restricted commands are not listed here.

Commands also work from ingame, Telegram, or in direct messages to the bot (IRC or Discord). $ is the default command prefix but € will work also.

You can use $help to view similar help messages from the bot.

To connect to IRC you need an IRC client; many are available for free download, and some even run within your browser.

For protection of your nickname, register and identify with NickServ

None. There are no rules on IRC. However, free speech does NOT apply, as it does in-game. Therefore you may be kicked or banned from IRC at a moderator's discretion. Usual reasons for bans are spam, excessive whining, trolling and general abusive behaviour. However, most moderators and admins are quite tolerant, and IRC bans are rare.

The esper.net network was chosen for purely pragmatic purposes - because this is where Notch's official #minecraft channel also resides, making it easier for existing minecraft IRC users to connect. Unfortunately, like most of Notch's decisions, this one showed remarkably little forward planning. Esper is notorious for its frequent netsplits and server failures. However, also like most of Notch's decisions, it's now too late to reverse, so we have to make the best of it.