" " I hate unmatched quotes, but I was being attacked by a slime, so here's the closing one. "- 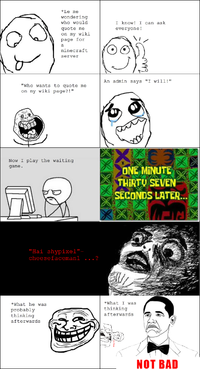 Usual goings-on in chat, a rage comic by

Screenshot of chat, demonstrating the results of several admin/moderator commands, and a grief alert.

Game chat at MinecraftOnline affords each player the right to express whatever opinion they wish about any topic they choose - we call this absolute free speech. To find out what this means in detail, see the free speech page.

It's amazing how many people don't seem to understand this.

Chat on other platforms

In-game chat is available on other platforms - as of now on Discord, IRC and Telegram. Unlike in-game chat, each social platform’s Terms of Service and admin-set rules apply. Users can be banned for violating its rules or by staff’s decision.

TeamSpeak was used in the past, which was faded away in time.