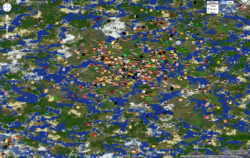 Screenshot of the map at a broad zoom, showing player homes with face markers, April 2011. 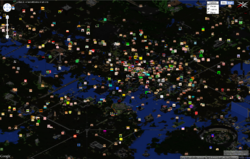 Night mode on a closer zoom near Spawn, showing the density of manmade lit structures, and player homes in the area, April 2011. 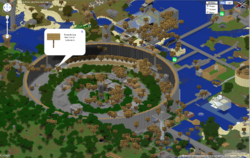 Map displaying signs in and around DrumCity, with warps shown as green markers.

Players often ask what the frequency of the updates to the "live" map are. There is not an exact reliable schedule. According to chat-rumors in late 2021, the update frequency used to be about twice per day.