Trinity Hall was started around February 2011, and construction was never completed. As of 2014 it is considered a historical site.

Named after the trinity symbol, found in the centre of the main room, this is quite possibly the biggest single room in any building in Freedonia. The main room is 100 blocks across, and each of the two spires are 50 blocks across.

The building has no function at present, although most likely will be used to house sculptures, or small creations.

Trinity Hall is south-west of the Central Nexus of Project Anubis, and is visible from the viewing platform of Project Angel.

The area around Trinity Hall is slowly undergoing re-landscaping. 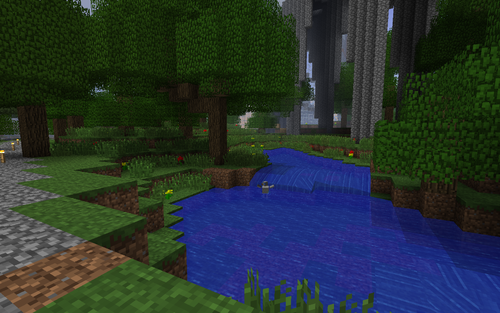 The first area to be finished in the landscaping is Runechan Pool, a small area near the northern spire.

The pool is so named because

runechan was the first to say something after I finished this area, and it kinda works as a name.

It consists of a 3 level pool, surrounded by trees and long grass, and seems to be favoured by chickens for swimming.