View of the completed project 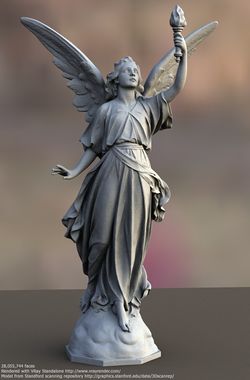 Rendering of the Stanford Angel model 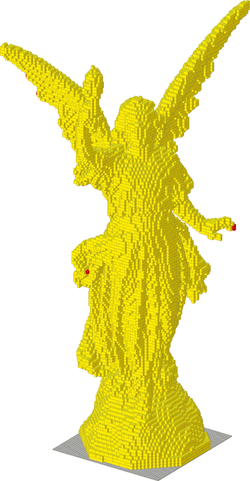 Rendering of the lego model, a good approximation of how the final will look in minecraft 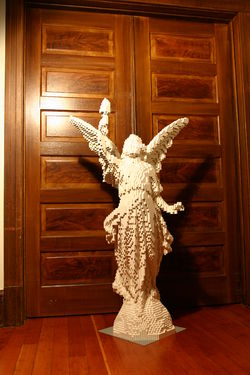 Photograph of the completed lego model

Project Angel is a long-term megaproject aiming to duplicate the Stanford Angel in Minecraft.

It is a statue based on a 3D scan of the Stanford Angel, the model data of which is available online for free to the public.

In order to accomodate maximum detail, the statue runs from the very lowest bedrock layer to the sky height, spanning 127 blocks in total.

Making the project considerably easier is an existing lego plan of the angel model. The lego plan is a layer-by-layer diagram, charting the statue as 143 layers high. In order to fit into the minecraft height limit, it was chosen to start at layer 16.

The blueprints are available in PDF format at http://www.brickshelf.com/gallery/happyfrosh/StanfordAngel/lucybig.pdf (a mirror is available at http://www.mediafire.com/?1n6xllatqn0l2vr).

It was chosen to construct this statue out of white wool for optimal visual impact.

All the wool for this project was harvested naturally, using nearby sheep farms and donations from contributing players. In order to save wool, the interior blocks are constructed from dirt instead.

A decision was made to create an observation room inside the torch held up by the angel. It was chosen to make the upheld arm of the statue hollow, in order to provide ladder access up into this room without altering the external appearance of the statue. No firm decision has been made at the time of writing regarding the possibility of putting the space inside the statue to use.

Due to the sensitive nature of the project, and the precision required to build it accurately, during construction its location was undisclosed except to a short list of contributors.