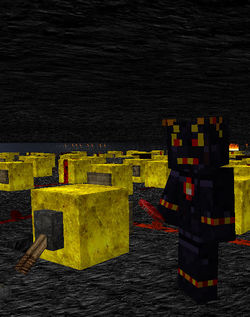 Shintyx is unhappy at being disturbed repairing his clock at Spawn

Shintyx was a moderator on Minecraftonline who was de-modded for his actions to harm the reputation of the server and banned for griefing using his modstick shortly before his de-modding.

Shintyx's in-game appearance was that of Obsidian and Redstone, both of which he is slightly obsessed with. His usual facial expression was rather angry (some say constipated) since his sanity disappeared through countless hours of Obsidian mining.

Shintyx's building and other projects included, among others, the Shintyx Time Corp, the Treasure Hunt and his homely Obsidian Palace. An Icechinko board was in progress. Shintyx had also made the controls for numerous Pigchinko boards and lots of other buildings or devices.

Shintyx occasionally stalked players without them noticing. Afterwards he gave them little gifts (but only if they didn't flymod).

Shintyx was recently turned into a Brony after repeated indoctrination by

Edessa. As such, he will love and tolerate the crap out of you. Unless you grief. Seriously, don't grief.

Shintyx was demodded after turning against the server's owner and attempting to damage the server's reputation. His demodding was delayed for some time in hopes that he would change his mind and return to us, but this was not to be.

During the time Shintyx was speaking out against the server before his demodding, he extensively griefed a large statue using his modstick. This grief and abuse of his moderator privileges in itself would have been enough to guarantee a demodding and a ban regardless of his other actions against the server.