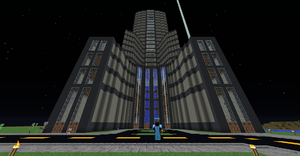 Jibletz standing in front of his new casino.

Jibletz_124, is a Moderator on MCO. Jibletz is the Crowned Emperor King of Jibtopia, and Rules alongside Queen

Thaelo. Jib can often be found terraforming the lands of Jibtopia and surrounding areas, as well as patrolling the lands of Freedonia and banishing griefers to the land beyond.

The Magmadome was the first project that Sir_Red was payed to work on. While up late at night hanging around

RudyChristina7, Red was approached by

jakedakiller13 with a proposal. Sir_Red was paid in the form of an Iron Level Donation by

jakedakiller13 to excavate some of the interior of the Magmadome.

The Square of Doom is a massive 1025x1025 block square wall surrounding Tedster Island. Sir_Red was payed by

Xyginator a total of 64 Diamond Blocks to finish what remained of the walls.

The Treetown Mega-Grinder is one of the largest Grinders on the map. At its peak it was one of the most popular places server-wide to go for everyone's exp fix.

This Monument to the Might of Jib was built almost entirely by Jibletz himself. The base structure of the castle took almost 2 weeks of painstaking block placement to complete. Even