From MinecraftOnline
(Redirected from Alkoisland)
Jump to navigation Jump to search

For a long time, the island known as Alko Island has been just the latter part: an island. It was after the abandonment of Risville, today known as the "Ruins of Risville", that Alko Island came to be.

Netrom5, the leader of Risville, took his people south in hopes of greener pastures. After passing through Kyrza and the early stages of Fakestaff_HQ, the people took to the sea.

It was not long before the once homeless people of Risville found their new home, Alko Island. The settlement soon began to cultivate and grow wheat to feed itself. And as because of trade traffic running past the sprouting island, good fortune and wealth was brought to the inhabitants. This also gave reason to build a lighthouse located south on the main islands tail. New industry was introduced as untouched mines were found beneath the island, rich in iron, gold and diamonds. All in all, the people of the island enjoyed life as it was.

Today, Alko Island serves as a haven for players longing for a silent and far away retreat. Given the yet decreasing trade traffic to nearby settlements, the island and its economy faltered. It is now a place to visit and view rather than a trading post.

In the later parts of the island's history, other explorers of Freedonia were attracted to it. Most notably,

thesprazzler, who made an agreement with the founder to build his own house there. Today, Alko Island is a much different place than it was in the past. 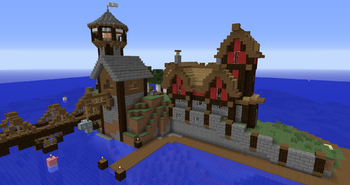 When Alko Island was first inhabited, the residents never gave the name of their island much thought. According to trading ledgers the island often received ambiguous names such as "Trading Island" or it was referred to the island between Treetown and mainland Freedonia. It wasn't before the island was added as a stop in the Mushiana boat route that its founder

Netrom5 decided the place needed a name. Net sought help among the community and

Bowbee came with the suggestion of naming the island Alko Island.

Alko Island is located in the Sea of South-West Freedonia. The island is accompanied by another floating island nearby. A few hundred paces (or swimming strokes) to the west you will find the mainland.

When traveling along Mushiana route, you will encounter Alko Island. The route will take you beneath the connecting bridge and on your way.

From spawn you'll need traverse the nexus to Treetown. Then you'll have to the Mushiana boat route until you arrive at the Lighthouse dock.