The reasoning of engaging in the MinecraftOnline Community, And the justification of furthermore sustainment of specified association

Netrom5 first joined MCO after getting tipped by

snikeren. This brought with him his merry gang of no-gooders

Kikkster. The group settled on a multibiomed island combined with sand and snow just a couple of hundred meters away from MountJackal. This settlement with the name Risville, or as it is know today; Ruins of Risville. While led by Netrom5, the gang quickly lost interest and left MCO leaving Netrom5 behind.

Alone, Netrom5 continued for a couple of month before leaving himself. Leaving the settlement half built.

Thereafter no one set foot on the island until netrom5 joined a few years after, bored and bent to finish his previous builds. This was in the summer of 2016. Fueled by ambition Netrom5 set out to not just build a pretty decent castle, but an entire city to surround it. This never happened. Halfway through clearing the area and building the main gate Netrom5 grew tired of the once active area and left. (Alas not the server this time, he merely migrated) 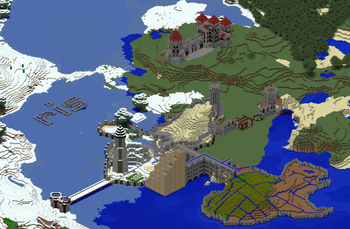 The settlement, in its current state

A rumor spread about a new settlement in the farthest lands south-west of Freedonia. This took netrom5 out exploring, jumping through nexuses and arriving in Kyrza. Partnered with his trusted keybinds, Netrom5 quickly /jumpto'ed over 2km out into nowhere where he settled a little island farm. Accompanied with its very own floating island. The island is known today as Alkoisland

Though not seeing the project ambitious enough, Netrom5 returned to the now abandoned settlement. This time to settle and found The autonomous state of Åssia. Seeing the settlement is under construction as of 28.11.2016 Netrom5 will try to update the wiki on his endeavors.

It seems history is doomed to repeat itself, as Netrom5 never completed the infrastructure of Åssia. One might argue the ideology of this ruler-less free state is the on of Anarchism. That is Anarchism built on the Non-Aggression Principle. Knowing Netrom to be a throughout capitalist one might consider The autonomous state of Åssia a haven for Anarchocapitalists and the like. But, who builds the roads in an anarchic society?

Netrom5 is a citizen of the following cities.

Netrom5 is a part of the following organizations.